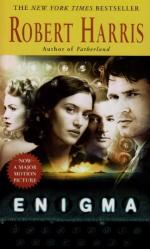 Robert Harris (novelist)
This Study Guide consists of approximately 34 pages of chapter summaries, quotes, character analysis, themes, and more - everything you need to sharpen your knowledge of Enigma.

Enigma is a machine that generates many different codes. It has one flaw: it does not decipher a letter as itself. For example, the letter A would never emerge as an A.

Shark is a code used by the Germans. It is impossible to crack.

Bletchley is the town where Bletchley Park is. It is a depressing, English town in the middle of nowhere.

Bletchley Park is the government communication headquarters for the British navy. It is also referred to as "the Park."

Cambridge is a town in England known for prestigious Cambridge University. Jericho studied there and was recruited into cryptology there.

A blackout is cryptology speak for when a code cannot be cracked and the enemy's messages cannot be intercepted.

More summaries and resources for teaching or studying Enigma.