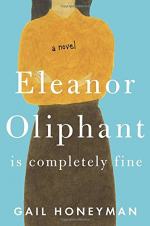 Honeyman, Gail
This Study Guide consists of approximately 37 pages of chapter summaries, quotes, character analysis, themes, and more - everything you need to sharpen your knowledge of Eleanor Oliphant Is Completely Fine.

This detailed literature summary also contains Quotes and a Free Quiz on Eleanor Oliphant Is Completely Fine by Honeyman, Gail .

The following version of this book was used to create this study guide: Honeyman, Gail. Eleanor Oliphant is Completely Fine. Pamela Dorman Books, 2017.

Eleanor Oliphant has worked in the same office for the past nine years. After winning tickets to a local concert in the office lottery, Eleanor believed she met the love of her life, the musician Johnnie Lomond. She resolved to make a project out of winning him over, before ever meeting him. Engaging in a series of physical makeovers, Eleanor disrupts her established routine. She buys herself new clothing and cosmetics, as well as a new phone and computer to follow the musician’s Twitter account.

Then, one day after work, Eleanor and the office’s new IT guy Raymond came across an elderly man who had fallen over. They helped the old man, whose name they learned was Sammy, calling an ambulance and waiting with him until it arrived. Eleanor visited Sammy in the hospital and began to form a friendship with Raymond and Sammy.

Eleanor attended a party Sammy’s daughter Laura threw for Sammy and one that Sammy’s son Keith was having for his 40th birthday. Eleanor’s boss Bob offered her a promotion to office manager. As Eleanor grew closer to Raymond, she began meeting with him for lunch and discussing her life. She told him about her abusive ex-boyfriend and her complicated relationship with her mother, whom she calls Mummy. Eleanor’s weekly phone conversations with Mummy made Eleanor upset and feel undeserving of love. Sammy died unexpectedly of a coronary. Eleanor and Raymond attended his funeral, during which they both became emotional.

After many preparations to transform her appearance, Eleanor planned to go to Johnnie Lomond’s concert. She had high hopes for meeting the musician, but when she learned that he was the opposite of the ideal gentleman that she had envisioned him to be at the concert, she began drinking profusely. She blacked out and woke up naked on the floor under the table in her flat. She planned to kill herself, but she kept drinking vodka and blacking out until Raymond found her at her flat after a few days of her absence from work. He helped her take care of herself and start counseling.

Through many sessions with Dr. Maria Temple, Eleanor opened up about her experiences in foster care, her discomfort about keeping in contact with Mummy, and the memories of her childhood that she cannot fully remember. Eleanor spoke about the house fire that she survived when she was young. Eleanor’s mother had started the fire in an attempt to kill Eleanor and Eleanor’s little sister Marianne. However, both Mummy and Marianne ended up perishing in the fire, while Eleanor survived, causing her extreme guilt.

Returning to work, Eleanor received a warm welcome from the office. Raymond helped Eleanor research the details of the fire that she did not remember. She decided to continue therapy to come to terms with why she had been pretending that she had been speaking to Mummy for all those years that Mummy had actually been dead. She made plans with Raymond to see him again.

More summaries and resources for teaching or studying Eleanor Oliphant Is Completely Fine.