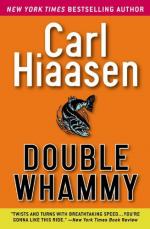 Carl Hiaasen
This Study Guide consists of approximately 50 pages of chapter summaries, quotes, character analysis, themes, and more - everything you need to sharpen your knowledge of Double Whammy.

This detailed literature summary also contains Topics for Discussion and a Free Quiz on Double Whammy by Carl Hiaasen.

Double Whammy is a dark comedy by writer Carl Hiaasen. R.J. Decker is a down-on-his-luck private investigator that is hired to catch a cheating bass fisherman. Not knowing anything about fishing, Decker turns to an eccentric recluse to help him with the case. This man, Skink, is a famous politician living incognito, who is determined to stop the cheater, but for different reasons. Together Skink and Decker find themselves embroiled in a world of murder and mayhem, going from investigators to fugitives on the run. Double Whammy is a suspenseful comedy that will appeal to readers of all backgrounds, even those who cannot tell a lunker from a hawg.

R.J. Decker is a private investigator, who has been hired by a rich businessman to prove that Dickie Lockhart cheats at bass tournaments in which the two men participate. Decker knows nothing about bass fishing, so when he arrives in Dickie's hometown, he hires a cheap guide to show him the ropes. This guide is named Skink. Skink is an eccentric recluse who likes to eat road kill. However, as odd as Skink is, he knows his stuff and Decker hopes he will prove to be a valuable addition to his investigation.

Soon after arriving in town, Decker learns that the man who was investigating Dickie before him is dead. Within days, Decker's colleague from his newspaper days is also found dead. Shortly after finding his friend's body, Decker and Skink are chased through the woods by a man with a gun. Skink kills the gunman and disposes of his body rather than calling the police. Decker considers quitting the case at this point, realizes he needs the money the case is paying.

Decker and Skink fly to New Orleans to attend a bass tournament being held there. Decker and Skink go out on the lake the night before the tournament and watch two men catch and cage several bass around the lake. Skink frees all but two of the caged bass. The next day, Decker and Skink stake out the remaining cage hoping to catch Dickie in the act of cheating. They catch two fishermen, but unfortunately neither one is Dickie.

That afternoon, Decker is surprised when Lanie Gault, the sister of his employer, shows up at his hotel. Skink disappears while Decker and Lanie spend the evening together. After leaving Lanie at her hotel, Decker goes looking for Skink. Rather than finding Skink, Decker finds Dickie Lockhart dead on the dock where the tournament took place. Decker leaves the body there and returns to his hotel. The next day, Decker leaves for the airport and is nearly mugged while changing a flat tire on his rental. It is because of this attack that Decker assumes a police detective friend, Al Garcia, wants to talk to him a few days later.

Decker nearly gives himself up to the police before Skink stops him. Skink has learned that Decker is the prime suspect in Dickie's murder. Skink helps Decker escape and the two men go on the run. Skink and Decker spend a night at Decker's ex-wife's house, only to be chased out of the house in the middle of the night when Garcia shows up. Decker and Skink then hide out in a hotel for a few days before Garcia catches up with them again. However, by this time, Garcia has figured out that Decker is innocent and has decided to help him prove it.

Decker, Skink, Garcia, and Skink's friend, Jim Tile, all gather at Skink's and begin formulating a plan to prove Decker's innocence. Skink enrolls Tile and Garcia in the Dickie Lockhart Memorial Bass Tournament at Lunker Lakes, a new community development owned by Charles Weeb, a televangelist and producer of Dickie's fishing show. To ensure Tile and Garcia win, Skink transports a large bass fish he has befriended to Lunker Lakes.

Before leaving for the tournament, Decker learns that a man in Gault's employ has kidnapped his ex-wife, Catherine. While Tile and Garcia join the bass tournament, Decker goes in search of Catherine. Skink, at the same time, pretends to be a blind man and is hired to fake a miraculous cure on Reverend Weeb's television show. Skink purposely fakes his cure, exposing Weeb as a fraud on national television. Later, when the fishermen begin arriving at the docks, Weeb is further embarrassed by the fact that no one was able to catch a fish except for Garcia, who caught a tiny bass. When Garcia asks for his winning check, Weeb has to admit that the money is missing. Weeb is then arrested for fraud.

At the same time, Gault learns where Skink hid his large fish. Determined to catch the fish and win the competition, Gault makes a fatal mistake. Gault hooks the fish and turns on his boat engine in order to aid in reeling the fish in. However, the fish proves to be more powerful than Gault imagined, pulling him overboard and killing him.

Decker meets with Catherine's kidnapper and arranges to exchange himself with her. However, the kidnapper has been ordered to kill both him and Catherine. Decker convinces the kidnapper to take a photo of him and Catherine for memory's sake. When the kidnapper pushes the button on the camera, it explodes, killing him instantly. Decker and Catherine return to the tournament where they hijack a camera and film Weeb's downfall. Later, when Skink realizes the fish are dying, he rushes to the rescue of his large bass, saving it from the polluted waters.

More summaries and resources for teaching or studying Double Whammy.