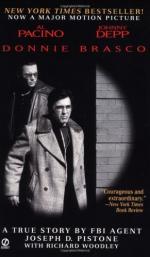 This detailed literature summary also contains Topics for Discussion and a Free Quiz on Donnie Brasco by Joseph D. Pistone.

"Donnie Brasco" is the true story of Agent Joseph Pistone's six years undercover in the Mafia. Agent Pistone slowly and methodically gains the respect and trust of several high ranking wise guys in the Bonanno family and quickly finds himself up for membership in the Bonanno family.

Agent Pistone not only puts his life on the line on a daily basis for this operation, but he is also disconnected from his family during this time. Except for the occasional quick visit home, Pistone rarely sees his family. They are able to take one vacation together during these six years and when Pistone's wife is in a terrible car wreck, he leaves the job for several days to help her recover. During these six years Agent Pistone is forced to give up his own life for this job and his family is forced to live without him. Although a significant toll is taken on the family, Agent Pistone is able to keep his family together and safe.

Throughout his six years undercover, Agent Pistone not only gathers never before known information about the inner workings of the Mafia, but also helps his fellow agents work their Mafia cases in other states. At times Agent Pistone helps agents as far away as Milwaukee and Florida work their mob cases. Pistone and the Florida agent, Rossi, are able to fool the New York Mafia into a joint venture with another crime family in Florida—the opening of King's Court, which is funded by the FBI.

Pistone's time undercover changes the Mafia forever. Through the information he gathers, many top Mafia bosses are convicted of their crimes or killed for their association with Pistone. The rules for membership are also changed after Pistone; the Mafia makes sure that no other FBI agent will ever get this close again and live to tell about it.