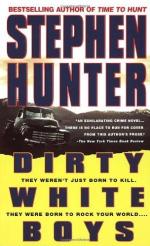 Richard makes many drawings of a lion for Lamar, who wants the drawings turned into a tattoo for him to have placed on his chest. These drawings help Bud Pewtie trace Lamar to a tattoo parlor.

Lamar, Odell, Richard, and Ruta Beth rob a Denny's restaurant. The robbery goes bad when a cop surprises them when he comes out of the bathroom. Several people are killed, but Lamar and his gang are able to escape.

Lamar goes to a tattoo parlor with his gang in order to have a picture of a lion placed on his chest. During the process of applying the tattoo, Bud Pewtie walks in. A gunfight ensues and Odell is killed.

Bud wears three guns after being shot at close range with a sawed off shotgun by Lamar.

Lamar, Odell, and Richard escape McAlester in a...