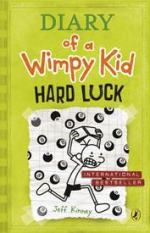 Jeff Kinney
This Study Guide consists of approximately 116 pages of chapter summaries, quotes, character analysis, themes, and more - everything you need to sharpen your knowledge of Diary of a Wimpy Kid: Hard Luck.

This detailed literature summary also contains Quotes and a Free Quiz on Diary of a Wimpy Kid: Hard Luck by Jeff Kinney.

Diary of a Wimpy Kid: Hard Luck tells the story of Greg Heffley, a middle school boy who can't seem to catch a break. Greg's luck begins to go downhill when his best friend, Rowley Jefferson, starts spending all his time with his new girlfriend, Abigail Brown. From there, Greg sees everything else as spiraling downward and it isn't until he starts making decisions for himself that Greg begins to see his luck change.

The main reason for this series of diary entries is because Greg's best friend Rowley has a girlfriend and is spending all his time with her. Aside from being a tad bit jealous and confused that Rowley has the girlfriend and not him, Greg is frustrated that he is left alone to face his walk to and from school by himself, carry his books by himself, blow chocolate milk bubbles by himself, and play with the snowballs he and Rowley froze for a later date, also by himself. The frustration Greg expresses is not only with not being able to spend time with Rowley playing and having fun, but also at being left to do things like look out for dog poop. Greg doesn't consider any of the boys at his lunch table his friend, so when Rowley and Abigail leave the table for the Couples Table, while Greg might still put up with the table's games such as French Fry Friday and Five-Second Rule, he doesn't have anyone to talk to, play with, or walk home with.

Greg decides to take on a boy named Fregley to see if he can mold Fregley into the kind of friend he wants. Greg teaches Fregley how to do what Rowley used to do: scout for dog poop so Greg doesn't step in it, carry his books, and play Five-Second Rule at the lunch table. Greg tries to turn Fregley into his funny sidekick, but his plan backfires when Fregley becomes so popular that Greg is crowded out.

With everything going on at school, Greg was looking forward to Spring break so that he could relax at home. However, his mom drops a bomb on the entire family: her family - Greg's aunts and cousins - are coming into town for Easter. Greg goes into great detail about his family, naming and describing many members of the family and the different reasons why they all drive him crazy. When Easter does finally come, there is even more family than he expected, since many of the extended family members came into town for the holiday. The family starts off getting along but ends up in a big to-do over Meemaw's missing diamond ring. Greg is relieved when his dad asks Aunt Gretchen and her twin boys to leave after only two days, since one of the boys called the cops when there was no more ketchup in the refrigerator. The shining moment during Greg's extended family's visit is when Greg finds a Magic 8 Ball under Rodrick's bed. He begins using the Magic 8 Ball to make all of his decisions that can be answered with a yes/no answer.

At school, Greg continues to use his Magic 8 Ball, though it is to his detriment. Greg uses the Magic 8 Ball to answer questions on a Social Studies test and is accused of cheating. When he lands in the Vice Principal's office, Vice Principal Roy lets Greg know that if he doesn't pull up his grades in the next couple weeks, he will have to attend summer school. Greg is willing to do anything he can to avoid that situation, so he buckles down and works hard to finish all of his missing homework assignments. The biggest task Greg has to complete in order to ensure he doesn't go to summer school is the Science Fair project. Greg considers purchasing an old project from kids who are wrongfully selling them, but decides against it. Greg stays late at school and stays up until 11:30 p.m. the night before the project is due in order to complete it.

A further development at school is that Greg gets the job as Yearbook photographer. He enjoys the position since it pays $5 for every photo used in the Yearbook, though he struggles to juggle his regular school work with the demand of taking candid photographs of his classmates. Greg has fun editing photos, however the way he edits them makes others look silly or even stupid. Ultimately, Greg resigns from the position after having to take a Cutest Couple photo of Rowley and Abigail.

One week after the photo shoot involving Rowley and Abigail, the two split up because Abigail decides to go back to her ex-boyfriend. Though it takes him a couple days, Greg reaches out to Rowley and the two become friends again. Though Greg began to take responsibility for his actions and see his luck change as soon as he started trying harder at school, it's after he regains his friendship with Rowley that Greg is once again a truly happy middle school boy.

More summaries and resources for teaching or studying Diary of a Wimpy Kid: Hard Luck.