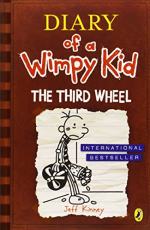 Jeff Kinney
This Study Guide consists of approximately 30 pages of chapter summaries, quotes, character analysis, themes, and more - everything you need to sharpen your knowledge of Diary of a Wimpy Kid.

Diary of a Wimpy Kid: The Third Wheel Summary & Study Guide includes comprehensive information and analysis to help you understand the book. This study guide contains the following sections:

This detailed literature summary also contains Quotes and a Free Quiz on Diary of a Wimpy Kid: The Third Wheel by Jeff Kinney.

“Diary of a Wimpy Kid: The Third Wheel” is a young adult novel by Jeff Kinney which follows the misadventures of middle-schooler Greg Heffley as he attempts to adjust to his Uncle Gary moving in, and finding a date for the Valentine’s Day Dance. It is the seventh installment in the “Wimpy Kid” series by Kinney. When the novel begins, Greg’s primary concern is dealing with his Uncle Gary moving in after Uncle Gary’s most recent failed business venture. Uncle Gary had borrowed money from Greg’s dad, Frank, to buy a Boston t-shirt stand. However, all of the t-shirts were misspelled, saying “Botson” instead of “Boston”. As a result, Uncle Gary is broke and needs a place to crash. At Greg’s mom’s insistence, Gary stays with the family.

Frank continually urges Gary to get a job, save money, and move out. Gary is more concerned with playing video games and sleeping on the couch in the living room, making it impossible for Greg to ever hang out there. Greg is also annoyed by the fact that his mom gives Gary an allowance without requiring Gary to do any chores. Greg is also annoyed by the dance unit that comes up in gym, because there aren’t enough girls for all the guys to be partners with. As a result, Greg must partner with another guy – an unpleasant thing for both of them.

At the same time, Vice Principal Roy announces that there will be special elections for student council, and all elected student positions. It is revealed that the existing student government skipped all their meetings to enjoy recess instead. Greg, ineligible to run because he has three detentions to his name, instead convinces his best friend Rowley to run. Greg intends Rowley to be a puppet politician, allowing Greg to make the real decisions behind the scenes. Rowley agrees to this, running for the position of Social Chairperson. He wins because no one runs against him. Eugene Ellis wins the presidency on a promise to stock all school bathrooms with soft toilet tissue.

After Eugene is elected, Mrs. Birch, the student council advisor, explains this will not be possible due to the cost. Eugene then confronts Mrs. Birch with the revelation that the teachers’ bathrooms are stocked with soft toilet tissue. Mrs. Birch agrees to a compromise: she allows students to bring in their own toilet paper from home. But this leads to a toilet paper fight, and makes the students in school realize if they want something, they will have to pay for it themselves. The student council decides on a Valentine’s Day Dance to raise funds. Greg spends the next few weeks doing all he can to round up a gorgeous date, but no girl will go with him. Greg even takes advice from Uncle Gary, dressing cooler and making it look like he is well-liked, but this does not work either.

Greg takes on Rowley as a wingman so the two can help each other find dates. Rowley ultimately reports that Abigail Brown is recently available. Since Greg doesn’t know Abigail well, he has Rowley suggest to her that the three of them go to the dance as a group. Abigail happily agrees. Greg hopes he will be able to keep Rowley at a distance in order to romance Abigail. At Rowley’s house, Greg is scared to see Rowley breaking out with chicken pox. He has Rowley wear a scarf and beach hat to cover them up. They then go to pick Abigail up. Abigail hits it off with Rowley, much to Greg’s annoyance.

At the dance, Abigail’s original date shows up with another girl. This causes drama, and causes Abigail to burst into tears. Greg decides to dance with her to make her feel better and get closer to her, but freaks out when he sees a red spot on her chin, thinking it is chicken pox. It turns out only to be a pimple. It turns out that Rowley also does not have chicken pox, but merely acne. Greg ends up coming down with chicken pox, however. He learns that Rowley and Abigail become a couple, but he is thrilled when Uncle Gary wins $40,000 from a lottery ticket, and moves out.

More summaries and resources for teaching or studying Diary of a Wimpy Kid: The Third Wheel.

Diary of a Wimpy Kid: The Third Wheel from BookRags. (c)2022 BookRags, Inc. All rights reserved.