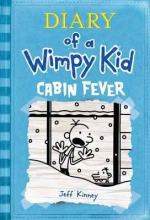 Jeff Kinney
This Study Guide consists of approximately 28 pages of chapter summaries, quotes, character analysis, themes, and more - everything you need to sharpen your knowledge of Diary of a Wimpy Kid.

This detailed literature summary also contains Quotes and a Free Quiz on Diary of a Wimpy Kid: Cabin Fever by Jeff Kinney.

“Diary of a Wimpy Kid: Cabin Fever” is a young adult novel by Jeff Kinney. It is the sixth installment in Kinney’s “Wimpy Kid” series. “Cabin Fever” follows the misadventures of Greg Heffley as his attempt to earn money for Christmas gifts gets him in trouble at school just as a massive blizzard sets in. When the novel begins, Thanksgiving has just passed, and Greg is panicked about being as good as he can so that Santa Claus will bring him many gifts. Greg spends much of his free time playing the game Net Critterz online. Greg needs cash to buy his virtual pet Chihuahua various items, but his mom says she will not give him any money. Further, she reveals that Greg will have to earn his own money to buy gifts for others this year. Greg asks for money to be left behind the church in an envelope request on the church’s Giving Tree, where people help one another out anonymously.

The newspaper carries a story about the vandalism. At school, Roy addresses the student body, demanding that the guilty parties, or anyone with any information, come forward. Rowley submits an anonymous note saying he and Greg are responsible for the vandalism. Greg refuses to identify Rowley as the co-conspirator, meaning that Greg must now clean the bricks alone. It takes him several hours, but he manages to do it. At home, Greg learns the police have paid his house a visit, but with no one home, have merely left a note. Greg is panicked and angered that Roy has brought in the police.

That night, a terrible blizzard sets in which rages all weekend and prevents the police from returning. Greg’s dad takes a hotel room near work since he cannot make it home. That leaves Greg, his mother, Rodrick, and Manny at home alone. Greg quickly gets bored, as there are only so many things that can be done. When Manny breaks their mom’s glasses, Greg is the one who must help his mom care for Manny. When the basement floods as a result of all the snow, Rodrick, whose bedroom is in the basement, must share Greg’s bedroom upstairs which annoys Greg even more. As Christmas Eve rolls around, Greg’s dad is able to return.

Greg is sent to drop off a toy donation at the Toy Drive bin outside the police station. Greg does this in a ski mask so the police do not identify him. He then swings by the church to see if anyone has left cash for him, shoveling the entire parking lot to make sure, but there is nothing there. The newspaper carries a story the next morning of an anonymous do-gooder who shoveled the school parking lot, enabling the soup kitchen to open. Greg considers publishing a second edition of his own newspaper to name himself as the do-gooder.

More summaries and resources for teaching or studying Diary of a Wimpy Kid: Cabin Fever.