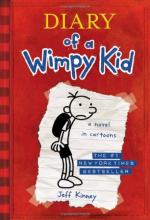 Jeff Kinney
This Study Guide consists of approximately 45 pages of chapter summaries, quotes, character analysis, themes, and more - everything you need to sharpen your knowledge of Diary of a Wimpy Kid.

Diary of a Wimpy Kid Summary & Study Guide includes comprehensive information and analysis to help you understand the book. This study guide contains the following sections:

This detailed literature summary also contains Quotes and a Free Quiz on Diary of a Wimpy Kid by Jeff Kinney.

The book “Diary of a Wimpy Kid” by Jeff Kinney chronicles the experiences of Greg Heffley as he went through his first year of middle school. Though he was self-absorbed and generally a brat, Greg’s actions were surprising when he took on the curse of the dreaded Cheese Touch to save his friend’s reputation. His journal entries throughout the school year address a variety of issues including his relationship with his family members and his best friend as well as his desire for popularity. A variety of lessons, such as the importance of loyalty, can be learned from the novel.

Through his year in school Greg was involved in a variety of escapades. He refused to sing in the school play because his brother was videotaping the performance, and then threw apples at the main character of the play. He got his best friend, Rowley Jefferson, into trouble for setting up a haunted house in Rowley’s basement, and then later broke Rowley’s hand when he threw a football at the boy and knocked him off the Big Wheel he was riding. On a more positive note, Greg did get the position as cartoonist for his school’s newspaper but probably did so only because he hid some of the entries he thought were better than his. After the teacher in charge of the newspaper edited Greg’s comic, making it seem as if Greg was trying to get favor with his teachers, Greg lost interest in being the cartoonist.

Greg’s relationship with best friend Rowley, a boy who lived down the street from Greg, is one of the main topics of the novel. Greg claimed he was best friends with Rowley even though he was always criticizing Rowley and trying to get his friend to behave ways Greg felt was more appropriate. On Halloween night, Rowley and Greg taunted some high school students, a mistake that came back to haunt them at the end of the school year. By that time, Greg and Rowley had split up as best friends because Greg let Rowley take the blame for terrorizing some kindergarteners. As safety patrols, the two had been assigned the duty of walking the kindergarteners home from school after their half-day classes were finished. One day Greg walked the students home alone and taunted them with worms he found on the sidewalk. An adult had seen what was happening but mistook Greg for Rowley. Greg told Rowley it was actually he who had done the terrorizing, but did not tell the school principal the truth. After that, Rowley began giving Greg the cold shoulder.

Greg confronted Rowley when Rowley took over the school newspaper comic after Greg lost interest. A group of students surrounded the boys as the argued on the school’s basketball court, believing there was going to be a fight. The group dispersed, however, when a trunkful of teenagers drove up to the court. It was the teens whom Greg and Rowley had taunted Halloween night. They made Rowley eat the cheese that had been left on the basketball court. Greg claimed he was allergic to dairy and was not forced to eat any of the cheese. When the other students noticed during the following school day that the cheese was gone, Greg knew he couldn’t tell them Rowley had been made to eat it. He knew if he did, Rowley would be so ridiculed he’d have to move out of state. Although he didn’t realize what he was doing at the time, Greg told the other kids he’d gotten tired of looking at the cheese and had thrown it away. Even though he saved Rowley’s reputation, the kids accused Greg of being infected with the Cheese Touch.

More summaries and resources for teaching or studying Diary of a Wimpy Kid.

Diary of a Wimpy Kid from BookRags. (c)2022 BookRags, Inc. All rights reserved.