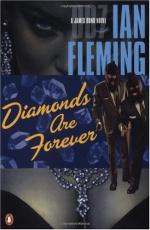 Ian Fleming
This Study Guide consists of approximately 38 pages of chapter summaries, quotes, character analysis, themes, and more - everything you need to sharpen your knowledge of Diamonds Are Forever.

This detailed literature summary also contains Topics for Discussion and a Free Quiz on Diamonds Are Forever by Ian Fleming.

Diamonds Are Forever is a novel by Ian Fleming featuring his popular character, James Bond. In this novel, Bond is assigned the task of infiltrating a diamond smuggling ring that begins in Africa, travels through England, and eventually ends in America. As part of the mission, Bond smuggles a package of diamonds into New York to seek out a job with the gang running the ring. Bond follows the instructions given to him by the man to whom he delivers the diamonds, but finds that taking orders is too boring to satisfy his more adventurous side. Bond purposely sets out to aggravate the mobster in charge of the gang and quickly finds himself in terrible danger. The novel is another exciting chapter in the life of James Bond and will entertain both die-hard fans of Fleming and those new to the author's prose.

M brings Bond to his office and teaches him a little about diamonds before telling him about a diamond smuggling ring that is causing trouble for the English government. M wants Bond to take the place of a man hired to be a courier for the smuggling ring and infiltrate the ring in hopes of learning who is in charge. However, M is concerned about a possible connection to the American mobsters and warns Bond to be cautious. Bond, as usual, chooses to ignore this concern. He smuggles a package of diamonds into New York in his golf bag and presents himself to the rings representative, expressing a desire to obtain a job with them. The man is cautious about Bond's eagerness, but does tell him that if he follows instructions, he may earn the job.

Bond is told to go to Saratoga Springs and bet on a horse in order to win his payment for the diamonds. The mob does not want to give Bond his money straight out because they are afraid it will encourage questions from customs when Bond tries to return to England. Instead, Bond is to bet on a horse that the mob is certain will win his race. However, thanks to the meddling of a friend of Bond's, the horse is disqualified after his race and Bond does not win any money. Bond calls the mob to complain and is given an alternative plan. Bond is to go to Las Vegas and play at a specific blackjack table at a specific time and he will be allowed to win his payment. However, Bond is told not to play at any other table during his visit in Las Vegas.

Bond wins his money and then ignores his orders by playing roulette. Bond wants to attract the attention of the mob boss, Seraffimo Spang. Bond succeeds at getting the man's attention. The next day while driving around the city, Bond realizes he is being followed. Bond and his taxi driver, who is really a Pinkerton man, try to evade their tails, but Bond is caught anyway. He is taken to a Western town that Spang has built to entertain himself and his friends. Here Bond is beaten badly by some of Spang's men. Spang has learned that Bond is not the courier Spang thought he had hired and Spang wants to know who he really is. However, Spang makes the mistake of leaving Bond alone while he and his men sleep.

Bond is rescued by the girl who set him up with the diamonds, a girl Bond has fallen in love with. Bond and the girl escape the small town by the rails and catch the town on fire on the way out. Before they reach safety, however, Bond and the girl find Spang coming up behind them in his antique train engine. Bond pulls the lever on the train switching arm and kills Spang as he and his train rush past. Moments later Bond hears the train crash.

Bond and the girl are rescued by a friend of Bond's who quickly puts Bond and the girl on a plane back to New York and then a ship to England. However, they are followed onto the ship by two of Spang's men with orders to kill the girl. Bond figures out this plot just in time to rescue the girl, but is forced to kill the two men. Later, Bond goes to Africa to stop the beginning arm of the smuggling ring. The man tries to get away, but Bond stops him by shooting down his helicopter, effectively ending the smuggling ring.

More summaries and resources for teaching or studying Diamonds Are Forever.