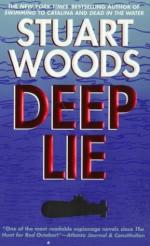 Stuart Woods
This Study Guide consists of approximately 34 pages of chapter summaries, quotes, character analysis, themes, and more - everything you need to sharpen your knowledge of Deep Lie.

This detailed literature summary also contains Topics for Discussion and a Free Quiz on Deep Lie: A Novel by Stuart Woods.

Deep Lie by Stuart Woods is an espionage thriller about a woman named Katherine Rule and her quest to prove that her intuition is right. Rule believes that the mysterious Majorov is up to something within the Soviet Union, but she is stopped at every turn by her own agency. Is it just Rule's ex husband trying to make her look like a fool, or is there something else going on here? Katherine Rule will do whatever it takes to find out the truth.

The main character of this novel is Katherine Rule, Soviet Office of the Directorate of Intelligence at the CIA. Rule has intelligence about a man named Viktor Majorov. The more she probes into him, the more questions she has. Rule has her team working to find out what Majorov is doing. When they get satellite photos of a training camp that doesn't add up, Rule sends an Italian computer geek named Emilio Appicella into Majorov's camp to see what he can find out.

During this time Majorov is at a training camp, he calls Malibu with a young man named Jan Helder. Helder was captain of a Whiskey submarine, but was pulled off the submarine to report to Majorov at Malibu. While he doesn't know what his actual mission is, he is training with a 'legend maker' named Mr. Jones. Jones quizzes Helder daily on his new identity. One day Helder is told part of his mission is to take a mini sub with a buoy and drop the buoy off the coast of Stockholm. Helder completes this mission, but has to kill his one and only crew member in the process. He is soon taken back to Malibu.

Appicella, while finishing his work on the computers, discovers Majorov's plan to attack the Swedish. He attempts to get a message to Rule, but cannot confirm she receives it. Appicella realizes he is being held at Malibu, when luck throws Will Lee in his path. Lee, who is Rule's boyfriend, happens to get stranded off the coast of Malibu. He is unaware of the nature of Malibu, and enlists the help of Majorov's men to repair his boat. Appicella sneaks aboard the boat. About an hour off the coast, he reveals himself to Lee. Appicella tells Lee, who is unaware that Appicella is Rule's spy, about the pending attack. Lee agrees to travel to Stockholm to stop Majorov.

Once in Stockholm, by a twist of fate, Rule meets up with the Lee and Appicella. Together, they are able to work with the Swedish government to stop the attack. Rule uses the intelligence gathered by Appicella to expose her friend Ed Rawls as the mole in the CIA who has been thwarting her efforts all along.

More summaries and resources for teaching or studying Deep Lie: A Novel.