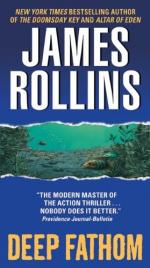 James Rollins
This Study Guide consists of approximately 58 pages of chapter summaries, quotes, character analysis, themes, and more - everything you need to sharpen your knowledge of Deep Fathom.

This detailed literature summary also contains Topics for Discussion and a Free Quiz on Deep Fathom by James Rollins.

The first solar eclipse of the new millennium starts, and then the ground begins to shake. By nightfall, there is chaos. Bodies are everywhere, the Aleutians are gone, and the living are in stunned disbelief. Fires burn, volcanoes erupt, and tsunami forces inundate the Hawaiian Islands. Air Force One hits turbulence and goes down into the ocean and Jack Kirkland is called to salvage the black boxes. Vice President Nafe uses the accident to escalate tensions with the Chinese, blaming them for the President's death. He wants to escalate tensions until a nuclear response can be justified. When Jack sees the crystal obelisk at the crash site, he is mesmerized but nothing prepares him for the effects it will have on his life and those around him.

Two professors from the University investigate the recently surfaced Dragon's of Okinawa. Neither one is prepared for the sight that greets them and exploring these pyramids is miraculous. The danger soon follows as men shoot at him and try to burn them out of the pyramid. As they make their way through a secret tunnel, Karen Grace and Miyuki Nakano find a star-shaped crystal that has properties they have never seen before. There is writing on the walls and all of it adds up to a mystery they are determined to solve. In the process of trying to decode the language, they discover a request for information on the same subject originating from the Deep Fathom as the crew aboard seeks to understand the writing on the obelisk below. When they join forces, they are met with opposition from CIA special operative David Spangler whose mission is to ensure the Chinese are found at fault for the crash and the crystal is kept secret and in US control. Any opposition to those goals is to be met with lethal force if necessary and David is only too happy to comply. His long-standing resentment for Jack goes back to the Atlantis shuttle crash during which his sister, Jack's fiance and all but Jack on board perished. Despite his best efforts to kill Jack, his revenge goes unsatisfied as he chases Kirkland from one region to another. He finally loses his life as he becomes a deep sea lunch for a giant squid, leaving Jack to save Karen who he realizes he has complicated feelings for and in the process save the world by facing his past and the Spartacus particle beam satellite placed into orbit by Atlantis which contributed to the shuttle's crash.

Time is warped and reversed by their actions and when time returns to normal, they find themselves watching the eclipse from sixteen days earlier. The President is saved and the future is changed.

More summaries and resources for teaching or studying Deep Fathom.