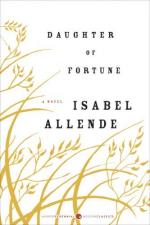 Isabel Allende
This Study Guide consists of approximately 25 pages of chapter summaries, quotes, character analysis, themes, and more - everything you need to sharpen your knowledge of Daughter of Fortune.

The story begins in Valparaiso, Chile. The port city is a mixture of native “Indians” and European immigrants. The Europeans tend to be merchants and missionaries and the native residents are usually the laborers. The colony is well established and there is little tension between groups, but they do not interact socially.

The Gold Rush is on in California in 1849. It becomes the new frontier, drawing people from Europe, the United States, South America, and Mexico. Everyone thinks they have a great opportunity to become wealthy without effort. California is in a state of near anarchy which develops slowly into a hierarchal society based on wealth and race.

Tao Chi’en is originally from China. China is the symbol of the East. The people who live there are divided sharply by class. The poor have very few opportunities to improve their situations. This location...

More summaries and resources for teaching or studying Daughter of Fortune.