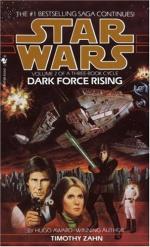 Timothy Zahn
This Study Guide consists of approximately 52 pages of chapter summaries, quotes, character analysis, themes, and more - everything you need to sharpen your knowledge of Dark Force Rising.

This detailed literature summary also contains Topics for Discussion and a Free Quiz on Dark Force Rising by Timothy Zahn.

The middle novel in a trilogy, Dark Force Rising follows Grand Admiral Thrawn and the warriors of the New Republic as they race to control the long-lost and highly coveted dreadnaughts of the Katana fleet ("Dark Force"). In desperate need of new warships in great quantity, Imperial Grand Admiral Thrawn has raided the Sluis Van space station and implicated New Republic Admiral Ackbar in possible treason. Thrawn hunts the notorious smuggler turned information-peddler, Talon Karrde, to locate likely ships. Han Solo is the first survivor of Sluis Van to return to Coruscant, where he reveals that the Empire is headed by a Grand Admiral who has perfected cloaking. The situation is grave.

The friends spread out to find information vindicating Ackbar. Han and Lando, via New Cov, meet Senator Bel Iblis, who has been fighting an independent war against the Empire. They try to convince him to join the New Republic and realize that he is flying three dreadnaughts from the long-lost Katana fleet. Luke leaves New Cov for Jomark, where he talks with an ancient Jedi Master, C'baoth, who wants to train him, sister Leia Organa Solo, and her unborn twins in the Force, to restore the Jedi order. Leia heads to Honoghr via Endor on a mission to free the native Noghri from Imperial servitude. She is pinned down there for a while by Thrawn, who has agreed to deliver her to C'baoth. Leia escapes to Coruscant, partially successful in her diplomatic mission, and leads the opposition to Councilor Fey'lya, who has framed Ackbar and now downplays the feasibility of salvaging the Katana fleet.

Karrde's assistant, Mara Jade, meanwhile, is captured by the Empire and reprises her wartime role as the "Emperor's Hand." Thrawn commissions her to talk Karrde into giving him the Katana fleet's coordinates, but betrays her by following her and arresting Karrde. Mara flies to Jomark to enlist Luke in a rescue mission, which proves successful. Two New Republic missions find the Katana fleet, arguing about jurisdiction, and are united when Leia unmasks Thrawn's ambition. The Empire appears in force to challenge them; Bel Iblis appears as an ally, and great battles are fought in space and aboard the decrepit Katana. Mara narrowly survives ejecting in space, and Luke and Han get a "really bad feeling" as they look down on the identical faces of the slain Imperials - clearly clones. Having gotten the lion's share of the dreadnaughts, Thrawn will have no trouble filling them with crews.