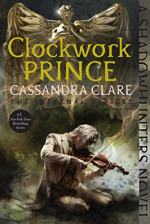 Cassandra Clare
This Study Guide consists of approximately 63 pages of chapter summaries, quotes, character analysis, themes, and more - everything you need to sharpen your knowledge of Clockwork Prince.

This detailed literature summary also contains Quotes and a Free Quiz on Clockwork Prince (The Infernal Devices) by Cassandra Clare.

Tessa Gray is living in the London Institute with a group of Shadowhunters. She has recently discovered that much about her life has been a lie and that she has the ability to change into any other person. The change includes the power to read memories and to know intimate details about that person. Tessa is trying to understand how to control the power while maintaining her own identity. As she faces her personal struggles, an evil man named Axel Mortmain is creating a clockwork army. He is determined to have Tessa – and her ability – at his side. Though Tessa has escaped from Mortmain for the moment, she is aware that his determination has not waned. As his army grows more sophisticated and more numerous, Tessa is surrounded by the loving support of the others in the London Shadowhunter Institute.

The Institute is run by Charlotte and Henry Branwell. Charlotte is more involved in the daily business, while Henry spends his time working in his lab. Charlotte knows everyone is watching her as a woman in a position traditionally held by a man. She feels the pressure. She also feels very alone in her job until she and Henry have a heart-to-heart talk and discover they love each other more than the other had guessed. That fuels her determination. Charlotte manages to hold onto their position, though she knows they have to stop Mortmain or face an all-out war.

Jem and Will are 17-year-old Shadowhunters who are bound as parabatai. Parabatai are brothers pledged to remain together and protect each other. Will is strong and determined, but he believes he has been cursed by a demon. According to the curse, anyone who loves Will is doomed to die. Will keeps everyone at arm's length though he lets Jem closer than most because Jem, who is addicted to a demon drug, is already dying. Jem is strong and determined as well, though the addiction has taken a toll. He knows he does not have many years to live.

When Jem falls in love with Tessa, he discovers that he feels stronger and healthier than he has in years. Tessa agrees to marry Jem just as Will discovers he was not actually cursed at all. Will professes his love, but Tessa knows she must stand by her promise to Jem. Will plans to ask Jem to step aside, but he sees his parabatai happier and healthier than he has been in years. Will decides that he will not take that away..

Meanwhile, Mortmain's clockwork army is becoming stronger, and the Clave recognizes that he is a real threat. Two Shadowhunters – Benedict and Jessie – have provided Mortmain with information. Jessie is jailed, but Charlotte resists the urge to turn Benedict over, feeling that is what Mortmain wants. During one battle, Tessa holds her brother, Nate, while he dies. Nate reveals that he and Tessa are biological cousins, not siblings. He has done terrible things that Tessa has not yet discovered.

More summaries and resources for teaching or studying Clockwork Prince (The Infernal Devices).