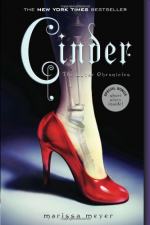 Cinder: Book One in the Lunar Chronicles Summary & Study Guide

Marissa Meyer
This Study Guide consists of approximately 47 pages of chapter summaries, quotes, character analysis, themes, and more - everything you need to sharpen your knowledge of Cinder.

Cinder: Book One in the Lunar Chronicles Summary & Study Guide includes comprehensive information and analysis to help you understand the book. This study guide contains the following sections:

This detailed literature summary also contains Topics for Discussion on Cinder: Book One in the Lunar Chronicles by Marissa Meyer.

Cinder is a story of desperation, suffering, discrimination, and an overwhelming hope for change and acceptance. Linh Cinder is a teenage girl, part human, part cyborg who, as a result of her hidden past and lineage, finds herself the center of a war between the Lunars, Earth, and her own family. Through determination and the help of a few caring people, Cinder is able to find strength in herself.

Cinder is the story of a part human, part cyborg young woman named Linh Cinder. Believed to have been in an accident at a young age, Cinder has been adapted mechanically to adjust to loss of limb and ability. Orphaned, she is taken in by Linh Garan. After his death, however, her stepmother, Adri, treats her cruelly, and forces her to work for the family's only income. Cinder soon becomes the local mechanic, and is a resounding success. It is through this success that Cinder meets Prince Kai, the emperor's son. Kai flirts with Cinder, much to her dismay. In the meantime, a plague hits the city, and cyborgs are pulled into a draft program. When Cinder's stepsister Peony is affected, Adri furiously sends Cinder off to the program, where she learns from Dr. Erland that she is not only immune to the plague, but also a Lunar, or part of a race of beings from the moon. Queen Levana, of the moon, has been trying to force peace with the Earth through a royal marriage to Kai.

Cinder plans to escape from Adri's reach as money from her research with Dr. Erland comes in. Adri and Pearl, her other stepsister, prepare for the ball, where Kai will be named King, following his father's death of the plague. Kai's continued flirtations with Cinder only leave her more pained, since her stepmother hates her and she knows Kai would reject her if he knew she were Lunar and cyborg. When the coronation occurs, however, Cinder receives a message warning her that Queen Levana plans to kill the prince. Cinder swallows her pride and attends the ball in a greasy dress, only to kiss Kai, trying to stop his marriage to Levana. Cinder is discovered as a shell, or a Lunar person who is hiding on Earth without Lunar powers, and Kai turns his back on her. It is only when she is imprisoned that Dr. Erland reveals she is really the Queen's niece, long thought dead, and able to dethrone Levana, thereby saving Earth, and Prince Kai. Cinder is instructed to escape, and meet up with Dr. Erland in Africa.

Cinder is a painful story of love, betrayal, discrimination, social class, and disease, while at the same time, allowing readers to hope for a promising future for Cinder. It is a tale that reminds readers that judging a book by its cover often forces one to miss the finer points of mankind.

More summaries and resources for teaching or studying Cinder: Book One in the Lunar Chronicles.

Cinder: Book One in the Lunar Chronicles from BookRags. (c)2022 BookRags, Inc. All rights reserved.