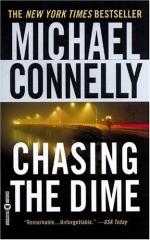 This is Henry Pierce's company in Santa Monica, California. Named for Amedeo Avogadro, a chemist who two hundred years previously was the first to discover the difference between molecules and atoms.

This is the name of the formula Henry's company has created for cellular energy conversion. It is the power supply system that would one day be able to patrol the bloodstream to find and destroy pathogens in it's human hosts. The name is nod to the 1966 film called the Fantastic Voyage where a submarine full of people is miniaturized and injected into a man's blood stream to destroy an inoperable blood clot in the brain.

This is the competition firm for Amedeo Technologies, headed by Elliot Bronson and with Tagawa Corporation from Japan holding twenty percent interest.

This is the Defense Advanced Research Projects Agency.

This is the name that...

Chasing the Dime: A Novel from BookRags. (c)2022 BookRags, Inc. All rights reserved.