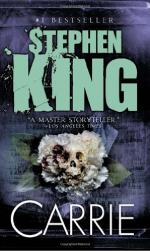 Carrie, by Steven King, is the story of a young girl and the sudden discovery of her telekinetic abilities. Carrie has been abused, both physically and emotionally, all of her life by her mother and her peers at school. Upon discovering her abilities, Carrie decides that she will make them all pay, and she does.

There is a rain of stones reported on in August of 1966 on the house of Mrs. Margret White. Mrs. White lives in the house with her three-year-old daughter Carrie. Carrie is abused at home and tormented at school. What no one knows is that Carrie White is telekinetic.

Carrie White is in the girls shower at school following her gym class. The girls are talking about prom and other things when Carrie steps out of the shower and all of them see the blood...