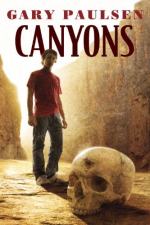 This detailed literature summary also contains Topics for Discussion and a Free Quiz on Canyons by Gary Paulsen.

Canyons is a novel by award winning writer Gary Paulsen. In this novel, Brennan Cole is a hardworking fifteen year old who tries to avoid the many men who come in and out of his mother's life. However, this is not always possible and Brennan finds himself forced to go on a camping trip with his mother, her new boyfriend, and a church youth group. This trip will change Brennan's life when he finds the skull of what turns out to have been a fourteen year old Indian warrior. Canyons is a novel of self discovery and inspiration, a novel that will entertain readers of all ages.

Brennan Cole spends as much of his time as possible outside of the house. When Brennan is not at school, he is running. This summer, Brennan has gotten a job mowing lawns to help pay for his school clothes in the fall. Brennan enjoys the physical work and likes the many excuses to separate himself from his mother and her many attempts at romance. However, Brennan discovers this is not always possible. One day he comes home from work to find his mother with yet another man in the kitchen. This man is a churchgoer who runs a youth group through the church. Much to Brennan's frustration, he finds himself talked into going on a camping trip with his mother, her new boyfriend, and his youth group.

The youth group is filled with young boys who are constantly on the go, talking, yelling, and fighting the whole way to the canyon where they are to camp. Brennan does his best to keep the boys from hurting one another on the hike into the canyon, but by the time they have set up their campsite, Brennan is tired of the noise. Brennan lays his sleeping bag some distance from the others just to have a few minutes of peace and quiet. During the night, however, Brennan can feels something pressing into his back. Brennan digs in the earth beneath him and unearths a human skull. Although there appears to be a bullet hole in the skull, Brennan believes it is too old to be a recent crime.

Brennan hides the skull in his backpack and takes it home with him. At home, Brennan examines the skull closer, measuring it and comparing it to his own head, leaving him convinced the skull belonged to someone his own age. Brennan begins to have dreams, intense dreams of running from someone or something. Brennan decides to turn to an old teacher for help with the skull. This teacher, Mr. Homesley, once inspired Brennan to do better at school and has become something of a friend. When Brennan tells Mr. Homesley about the skull, Mr. Homesley sets up a meeting for Brennan with a coroner friend of his.

The coroner looks at the skull and determines it is more than a hundred years old and was the body of a young boy, more than likely an Indian. The coroner also determines that the boy was killed by a rifle held inches from the boy's skull. Mr. Homesley then contacts a friend of his with the Western Historical Archives to get information on violent deaths in that area between 1855 and 1885. When the information arrives, Brennan stays up all night going through it. When Brennan reads about a young Indian warrior killed in the canyons near El Paso, Brennan instinctively knows he has found the owner of the skull.

Brennan returns home only to discover his mother has found the skull. Brennan takes the skull and sneaks out of the house. Brennan returns to the canyon on foot during the night only to find his mother and the police waiting for him when he arrives. Brennan manages to slip past them and make his way into the canyon, instinctively taking the skull to a medicine place just beyond where the young Indian warrior died, returning him to a place of sanctuary the warrior had sought in life as well as death.