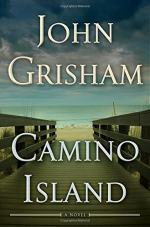 The following version of the novel was used to create this study guide: Grisham, John. Camino Island. Doubleday, June 6, 2017. Kindle.

In Camino Island by John Grisham, aspiring writer Mercer Mann struggled with morality issues when she was asked to help catch a man accused of having purchased five handwritten manuscripts by F. Scott Fitzgerald that had been stolen from the library at Princeton University. Mercer was employed to befriend Bruce Cable, a bookstore owner believed to be in possession of the manuscripts. Even as Mercer struggled with her own conscience when it came to turning Bruce in to the authorities, Bruce suspected she was spying on him and used her to trick the FBI into believing he did not have the stolen property. He used his false innocence to broker a deal with Princeton through a third party to sell the manuscripts back for a significant profit. He later tracked down Mercer and thanked her for setting up the situation so he could cash in with the manuscripts.

Five men, led by former Army Ranger Denny, planned what they believed was the perfect heist of the five handwritten Fitzgerald manuscripts from Princeton’s Firestone library. The only snag in their plans was a small drop of blood left behind by Jerry when he scraped his wrist on a splinter. The FBI performed a DNA analysis on this drop of blood and soon had Jerry and Mark, two of the criminals, in custody. Denny killed Trey, the fourth man, because Denny was afraid Trey would tell on the others if he was arrested. The fifth man involved in the heist escaped overseas. Feeling the pressure, Denny sold the manuscripts for a mere $500,000 because he did not want to get caught with them.

Months after the theft, Mercer was approached by Elaine Shelby. Shelby asked Mercer to help her company which did investigative work for the insurance company that insured the manuscripts. Shelby needed to find out who had possession of the manuscripts. They suspected Bruce was the current owner of the manuscripts because of his interest in rare and valuable literature. They had also discovered he was active in buying books on the black market. Mercer was a good fit for the job to help in Shelby's investigation because Mercer's family owned a cottage on Camino Island where Mercer could stay while she worked on writing her next novel.

Soon after arriving on the island Mercer began making friends with area writers. They introduced her to Bruce, whom she quickly grew to like because of his charismatic personality and the way he supported writers in his area. Bruce taught Mercer about rare and valuable literature. He also encouraged her to keep writing and gave her tips to improve her writing. Even though he was married and Mercer believed she would never have an affair with a married man, Bruce convinced her that his marriage was an open one and his wife did not care what he did. It was after an evening together that Bruce showed Mercer the handwritten copy of Fitzgerald’s The Last Tycoon. Mercer left quickly, claiming to want to have nothing to do with the stolen document. She struggled with what to do next. She considered Bruce a friend and did not want to send him to jail, yet she had agreed to try to find evidence against Bruce.