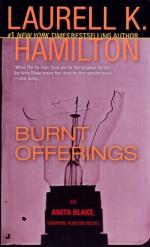 Laurell K. Hamilton
This Study Guide consists of approximately 45 pages of chapter summaries, quotes, character analysis, themes, and more - everything you need to sharpen your knowledge of Burnt Offerings.

This detailed literature summary also contains Topics for Discussion and a Free Quiz on Burnt Offerings by Laurell K. Hamilton.

The novel BURNT OFFERINGS follows the life of Anita Blake, vampire executioner and zombie raiser as she struggles alongside her boyfriend Jean Claude, the master vampire of St. Louis, to keep the area vampires safe from a radical human organizations and themselves safe from the vampire council.

The novel begins in what seems to be a normal business day for Anita as she meets with Pete McKinnon, a fire fighter in the area. McKinnon is concerned about fires he believes are being set by someone with psychic abilities. As McKinnon is the long time friend of Sergeant Dolph Stoff, Anita's friend and co-worker on the Regional Preternatural Investigation Team, Anita agrees to see if there is anything she can do to help.

A long day ends with a relaxing dinner with Jean Claude, the Master of the City. The two plan on a romantic evening but are disrupted by the arrival of Yvette and Balthasar, bringing news that the vampire council is in the area. Jean Claude is obviously concerned, and Anita is leery. The council has come to St. Louis to cause problems, but what kind of problems remains to be seen.

The arrival of Asher, another master vampire with a history with Jean Claude, stuns the pair. Asher had been deeply involved with Jean Claude and Julianna, Asher's human servant, until she was killed as a witch at the same time Asher was forever scarred with holy water. Since that day Asher has hated Jean Claude, and the love he and Anita share is now the force that feeds him. Asher believes Jean Claude destroyed Julianna, and so all Asher lives for is to destroy Anita.

In addition to dealing with the vampire council, Anita also has to worry about the pard of wereleopards that she has left without a leader. After killing their leader Gabriel, the pard is unprotected. Guiltily, Anita claims them as her own, vowing to protect them. The leopards happily accept her protection. The conflict lies in the fact that Anita is also lupa to the werewolves. Richard, her ex-boyfriend and Ulfric or leader of the wolves, declared Anita his lupa, or female leader, when they were a couple. Even though they are no longer together Anita is still lupa until Richard replaces her.

The battle lines are drawn for Anita and her friends as they battle the council while Anita tries to help the police find the people behind crimes against vampires in the city. It takes working together with the Traveler, one of the vampire council members, to come to the bottom of the crimes against the vampires. The Traveler also realizes that Jean Claude and Anita have not committed any crimes against the council, siding with them in the end. Even Asher comes to realize that Jean Claude had not deceived him centuries ago as he had always believed.

The final mystery is solved when Warrick, a master vampire in his own right, is revealed to be the pyrokinetic that has been setting fires around the city. On the orders of Yvette, the rotting vampire that has tortured him for centuries, Warrick had been causing destruction in the hopes of causing vampires to be non-citizens once again. While away from her master, Yvette lost her power over Warrick who gained his full power. Warrick destroys Yvette, unwilling to allow her to cause any others pain.

Anita, Jean Claude and Richard are able to resolve some of their differences and work together in order to better understand the vampire marks that they share and to learn to control them. Anita still struggles to control the spirit or Raina, the former lupa of the werewolves. However, by working together with the other members of her powerful triumvirate, Anita is sure that there will come a day when she finally has control of all aspects of her life.

More summaries and resources for teaching or studying Burnt Offerings.