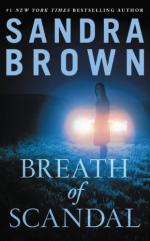 This detailed literature summary also contains Quotes and a Free Quiz on Breath of Scandal by Sandra Brown.

“Breath of Scandal” by Sandra Brown is a work of fiction.

The story begins with the history of Jade Sperry, an eighteen year old high school senior living in the coastal town of Palmetto, South Carolina. Jade is a beautiful, popular, and intelligent girl with big dreams. She and her boyfriend, Gary Parker, want to break away from the small town. After making their way in the world, they plan on returning to bolster the economy and to rescue the townspeople from the clutches of the greedy and ruthless Patchett family. The Patchett family, headed by Ivan Patchett, owns the local soybean plant. The factory employs the majority of workers in Palmetto which allows Patchett to run their lives. Patchett also has his hand in the police department and wields a great deal of power.

Jade and Gary are both very devout Christians and well respected in the community. That is, until the night Jade is gang raped by three local boys, including Ivan Patchett’s son, Neal, and becomes pregnant. Jade leaves Palmetto, South Carolina under a “breath of scandal.” Jade, however, is not one to give up. Her new goal in life, particularly after Gary’s death, is to seek revenge on the boys who raped her.

Jade attends school at Dander College. After graduating, she joins a firm that builds textile plants. Jade becomes an executive in the company. For the first time, she wields enough power to put her plan into action.

Fifteen years after the rape, Jade returns to Palmetto with the news that she is going to build a new factory. The factory will ruin the Patchetts’ dynasty, which is what Jade wants more than anything. Along the way, Jade meets Dillon Burke and falls in love.

Jade faces many demons in the story including being raped, weathering her boyfriend’s suicide, finding out the truth about her father’s death, living in poverty, being abandoned by her mother, and being betrayed by her best friend.

Intertwined with Jade’s story is the story of Dillon Burke. Dillon’s parents died, and he was raised by his grandmother until her death. From that point on, Dillon lived in foster homes. It was then that Dillon began to get into trouble. Dillon managed to straighten his life out when he met a caring counselor at a “juvenile camp.”

The story starts with Dillon and his wife on their honeymoon. Dillon is the happiest and most successful he has ever been. During a trip to Switzerland, Dillon’s wife contracts a virus and then an allergic reaction, causing them to lose an unborn child. Dillon and Debra have a boy not long after. Debra and the baby die by asphyxiation while Dillon is on his way home from work.

For the next seven years Dillon is a nomad, traveling from job to job, taking no responsibilities and developing no ties.

Dillon’s life changes when Jade Sperry sees him working at a construction site. Jade learns that Dillon’s boss is shady and repugnant. Jade has him arrested. Jade learns that Dillon has been the real leader on the job and wants to hire him for a new project. Despite Dillon’s rude behavior and marked disinterest, he ends up taking Jade’s offer and moves to Palmetto.

Jade and Dillon clash on many levels; however, Dillon rekindles his passion for his work and soon dives into it – and a would-be relationship with Jade – whole heartedly.

Eventually, Jade and Dillon become lovers and work together to move forward on the textile plant. Jade insists on facing the Patchetts alone. In the end, she prevails.