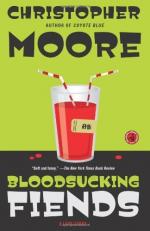 This detailed literature summary also contains Topics for Discussion and a Free Quiz on Bloodsucking Fiends by Christopher Moore.

Jody is a woman with low self-confidence who is afraid to be alone. Then, one day, she is attacked and turned into a vampire. Bloodsucking Fiends is the story of how Jody adapts to life as a vampire, discovering unknown power and self-confidence. Still, she is unable to overcome her fear of being alone and her need of a man. She uses and manipulates Tommy, her naive lover, and ultimately, she turns him into a vampire so that she will not have to be alone.

The story begins one night while Jody walking to the bus from a late night at her job. She is attacked and left under a dumpster in an alley, waking two nights later with her hand, which was exposed to the sun, burned. Her attacker has left her $70,000 in cash. Jody is confused and finds her way back to her live-in boyfriend, hoping for help and sympathy. Kurt, however, is angry, selfish, and helpless. They fight, and Jody finds herself knocking him out and drinking his blood. She must face that she's a vampire.

Jody finds a motel room and decides that she needs someone who can help her in the daytime. She runs across Tommy, a want-to-be writer who is new in San Francisco and works as night supervisor at the Marina Safeway. He is a young boy from Indiana, naive and easily attracted by Jody's allure. Jody moves in with him, and Tommy becomes her helper and her source of blood.

Meanwhile, the vampire who turned Jody is murdering people who are about to die and leaving their bodies for the police. He leaves a trail of bodies wherever Jody is and shadows Jody and Tommy during the night, playing a survival game with his new offspring. Tommy becomes a murder suspect, and the vampire threatens to kill him.

Jody tells Tommy that the vampire must die and sends him off to hunt the killer. Tommy gathers his employees on the Marina Safeway night shift, and with the help of the homeless Emperor of San Francisco, they track the vampire to a yacht anchored off the coast. With the police close behind, the Safeway crew blows up the yacht, but the vampire isn't killed. Wounded and burned, he makes his way to shore, where the police are confronting Tommy and his coworkers.

The Safeway workers attack the vampire with all their weapons, severely wounding him, but Jody has changed her mind about killing him. She shows up at the last minute, stopping the killing. The group buys off the police officers, and Jody takes the vampire back to her and Tommy's loft apartment, where the two vampires talk all night. The next morning, afraid that Jody will leave him, Tommy electroplates both of them in brass. He drills holes in the brass over Jody's ears so that she can hear them. Jody, however, has learned how to turn to mist and escapes her brass prison through the ear holes. She tells Tommy that she never meant to leave him and only wanted information from the vampire. Now, she knows how to turn Tommy into a vampire, too, and she takes him into her arms to begin the transformation.