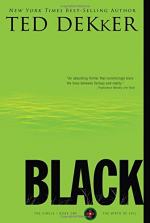 Ted Dekker
This Study Guide consists of approximately 91 pages of chapter summaries, quotes, character analysis, themes, and more - everything you need to sharpen your knowledge of Black.

Denver is the city that Kara and Thomas live at the beginning of the novel and where Thomas learns that a mob from New York is after him for money. Here, Kara has established herself as a nurse and Thomas hopes to escape the desperate and illegal things he did to save his mother from her debt and depression. This is also the first place where Thomas dreams of the colored forest, starting the rest of the novel as he and Kara are forced to leave for Atlanta to try and stop the Raison Strain.

Atlanta is the base of the Center for Disease Control (CDC) and the second city that Thomas and Kara go to try and stop the Raison Strain. This is where the reader learns that Thomas’ dreams of the future are true after Kara wins $385,000 from betting on Joy Flyer, the horse name...

More summaries and resources for teaching or studying Black.