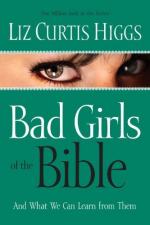 Mitzi leans toward her husband, trying to give him an eyeful of her cleavage. Her husband just continues to read the paper. Christopher didn't know how boring her days were, waiting for him to get home and notice her. Christopher mentions the new guy he's hired at the office. Joe is his name. Mitzi wonders if Christopher is really that blind that he didn't know she'd already noticed Joe.

Mitzi has heard the rumors that Joe is a do-gooder and religious. She just thinks that she needs a challenge in her life anyway. Christopher has left her alone too much and she thinks Joe will add a little pep to her life. Today, Christopher tells her that he'll be home late again.

After Christopher leaves, Mitzi makes a few calls, telling the gardener and housekeeper...

(read more from the Chapter 2, Bored to Distraction Summary)

Bad Girls of the Bible from BookRags. (c)2023 BookRags, Inc. All rights reserved.