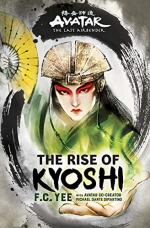 Related Topics
Avatar, The Last Airbender: The Shadow of Kyoshi

F. C. Yee
This Study Guide consists of approximately 75 pages of chapter summaries, quotes, character analysis, themes, and more - everything you need to sharpen your knowledge of Avatar, The Last Airbender.

Avatar, The Last Airbender: The Rise of Kyoshi Summary & Study Guide includes comprehensive information and analysis to help you understand the book. This study guide contains the following sections:

This detailed literature summary also contains Quotes and a Free Quiz on Avatar, The Last Airbender: The Rise of Kyoshi by F. C. Yee.

The following version of this book was used to create the guide: Yee, F. C. The Rise of Kyoshi. Amulet Books, 2019.

The Rise of Kyoshi is set within the fictional world of the Avatar universe, as portrayed in the television show Avatar: The Last Airbender and its spinoff, Avatar: The Legend of Korra. In this world, people are divided between four nations: the Fire Nation, the Air Nomads, the Water Tribes, and the Earth Kingdom. Some people from each nation are able to move their native element using a technique called “bending”. One person, the Avatar, is born with the innate ability to bend all four elements and is often tasked with using their abilities to keep balance in the world. When an Avatar dies, they are reincarnated into a new person in a nation different from the one preceding them, making the Avatar always born in a specific order: Fire, Air, Water, Earth, repeat.

At the novel’s opening the previous Avatar, Kuruk of the Water Tribes, has passed away unexpectedly at only 33 years old. Seven years after his death, Kuruk’s friends Kelsang, a cheerful Air Nomad, and Jianzhu, an Earth Kingdom politician, are searching, without luck, for the next Avatar, and take their search to the small town of Yokoya Port. They begin to administer a test on a young homeless girl named Kyoshi to see if she may be an Avatar, but she runs away before they complete it. Nine years later, Jianzhu and Kelsang have falsely identified a boy named Yun as the Avatar, and have begun training him in a large compound that Jianzhu builds in Yokoya. Kelsang arranges for Kyoshi to live and work in the compound, and she becomes close with Yun and Rangi, Yun’s firebender bodyguard.

Yun asks Kyoshi to come with him to an iceberg on a mission to sign a peace treaty with Tagaka, a formidable pirate. During the meeting, Tagaka mentions some of the extremely brutal actions Jianzhu had taken to put down the various organized criminal sects, referred to as the daofei, and winds up attacking them. Kyoshi begins to fight and, without realizing it, uses her earthbending to pull up earth from underwater, breaking the iceberg and allowing her group to escape. This feat of extreme bending power, along with other clues, leads Jianzhu and Kelsang to realize that Kyoshi could be the Avatar, not Yun. Jianzhu takes Yun and Kyoshi on a test to determine which is the proper Avatar, bringing them in front of a dark spirit who identifies Kyoshi as the Avatar. Satisfied, Jianzhu takes Kyoshi away and allows the spirit to swallow Yun. Kelsang finds them and confronts Jianzhu, but Jianzhu kills him. Kyoshi escapes, and Jianzhu warns her that he will find her, having dedicated his life to the Avatar.

Kyoshi returns briefly to Yokoya to gather her things and tells Rangi what happened. She and Rangi travel together to meet with Kyoshi’s parents’ old criminal crew: The Flying Opera Company, consisting of teenage earthbender Lek, strong and silent Wong, waterbender Kirima, and Lao Ge, a mysterious old man. Kyoshi explains her background to Rangi: her mother was Jesa, an air nomad who met Hark, an actor and Kyoshi’s father, while traveling Earth Kingdom. Together, the two chose to abandon their old lives and become criminals, gathering their crew. After they had Kyoshi they stopped for a few years before abandoning her in Yokoya with a trunk containing their personal items and a note on how to find the Flying Opera Company. Kyoshi successfully connects with them and requests their help in her quest to exact revenge on Jianzhu. They agree to help her, though not before making Kyoshi swear the daofei vows. Kyoshi begins dressing like her parents: wearing her mother’s gold headdress and her father’s stage makeup. Meanwhile, Rangi and Kyoshi fall in love and begin to pursue a relationship.

Jianzhu returns to Yokoya and discusses the situation with Hei-Ran, Rangi’s mother and Yun’s onetime firebending teacher. Jianzhu lies to Hei-Ran about what happened but admits that Kyoshi is the real Avatar and that Yun and Kelsang are dead. Together, the two plot how to keep the news of Yun’s death and Kyoshi’s avatar status hidden while they try to look for Kyoshi, employing the assistance of tracking animals and Jianzhu’s wide network of spies and allies, all while trying to hold off political pressure from his rival, Hui. At the same time, Kyoshi reveals herself as the Avatar to the group and begins training with each of them. Kyoshi discovers that Lao Ge is actually a deadly assassin, and asks him to help her learn how to kill so she can take revenge on Jianzhu.

Kyoshi learns that the Flying Opera Company is indebted to a mysterious daofei organization called the Autumn Bloom and the group is forced to help plan a raid on a prison run by a corrupt Earth Kingdom governor named Te Sihung and break out a criminal who has been locked there for ten years. Lao Ge tells Kyoshi that Te is a corrupt politician who has caused a famine and that she could use him to “practice” killing. However, on the night of the raid Kyoshi is shocked to see Te is just a teenager. Kyoshi saves Te’s life and manages to break out the prisoner, though she is horrified to learn that the prisoner is Xu Ping An, a bloodthirsty and extremely violent criminal. Kyoshi later challenges Xu to a duel, where he shoots her with lightning. Kyoshi is able to get the upper hand and goes into the Avatar State, where she is able to use the wisdom, experience, and power of all the Avatars before her. She kills Xu and scatters his allies.

As Kyoshi recovers from her injuries at the duel, she, Lek, and Rangi go into a nearby town and are suddenly each shot with poison darts, immobilizing them. Lek is killed and Rangi is kidnapped, and Kyoshi later finds a note attached to Rangi’s severed topknot, asking to meet the Avatar alone in a town called Qinchao. Kyoshi goes, where she sees Jianzhu, who explains that he kidnapped Rangi and poisoned Hei-Ran, though not fatally, in order to force Kyoshi to come back with him. As the two begin to fight, Yun suddenly appears and murders Jianzhu before suddenly leaving. Kirima, Wong, and Lao Ge manage to find Rangi alive but shaken. Rangi decides to take her mother, who is now comatose, to the North Pole where there are world-renown healers, while Kirima, Wong, and Lao Ge choose to go back to their previous lives. Kyoshi herself goes to the air temple where Kelsang used to live and reveals herself as the Avatar to the world, before suddenly seeing a vision of Kuruk, the Avatar who lived before her.

More summaries and resources for teaching or studying Avatar, The Last Airbender: The Rise of Kyoshi.

Avatar, The Last Airbender: The Rise of Kyoshi from BookRags. (c)2022 BookRags, Inc. All rights reserved.