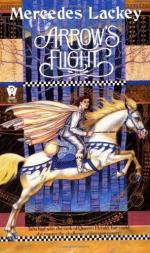 Mercedes Lackey
This Study Guide consists of approximately 46 pages of chapter summaries, quotes, character analysis, themes, and more - everything you need to sharpen your knowledge of Arrow's Flight.

This detailed literature summary also contains Topics for Discussion and a Free Quiz on Arrow's Flight by Mercedes Lackey.

"Arrow's Flight" by Mercedes Lackey is an intriguing tale of a Herald's challenges in the magical world of Velgarth. Talia becomes a Herald and must pass her internship, which holds many trials that she never expected to face. "Arrow's Flight" is a fascinating story filled with magic and adventure.

Talia graduates from the Collegium, the school for Heralds, and receives her Whites, the uniform for Heralds, but she continues to worry about Elspeth, the Queen's daughter, who still has not been Chosen by a Companion and cannot be announced Heir until she is Chosen. When Elspeth is finally Chosen, Talia prepares for and participates in the official ceremony and attends a private party for the Heralds with Kris and Dirk, who seems overly interested in Talia. The day after the ritual, Talia receives notice that her internship with Kris will begin the next day, and they are assigned to the Northern Border Sector.

At the beginning of their journey, Kris informs Talia of the Court rumors regarding her misuse of her Gift and Elspeth's dependence on Talia. Talia's shields begin to slip, and Kris worries as she withdraws into isolation. At Hevenbeck, they mete out judgment on a maddened sewing maid who sacrifices poultry in order to exact revenge on her employers, and they encounter a plague at Waymeet where Kerithwyn, a Healer, warns Talia and Kris about Talia's lack of control.

When Kris and Talia are snowed in at a Waystation during a blizzard, they begin sleeping together as they work on Talia's control of her Gift. Kris teaches Talia Grounding and Centering so that her shields have a proper base. They are rescued after a month by the Guard and the Herald Tedric. Talia restores the Weatherwitch's happiness by reuniting her with her child, and the Weatherwitch prophesizes concerning Talia. After Skif's visit near Midsummer, Talia and Kris' fear of the other's infatuation causes them to fight, but that clears the air and allows them to strengthen their friendship. Kris tells Talia his suspicion that Dirk is lifebonded to Talia.

Talia and Kris finish their rounds of the Northern Border Sector with Talia in charge. At Hevenbeck, they re-encounter the angry sewing maid who has allowed raiders into the village, but Kris and Talia defeat the raiders. In Westmark, Talia judges and punishes the sexually abusive stepfather of a dead girl whom he also killed. When special couriers question whether this is an ethical use of her Gift, Talia defends her decision, convincing Kris that she has finally become a full Herald. Talia and Kris rendezvous with the new Heralds of the Sector, and as they head towards their lodgings for the night, Kris expresses his faith in Talia's ability to handle her duties.

More summaries and resources for teaching or studying Arrow's Flight.