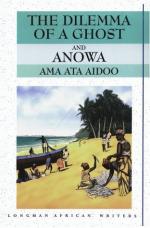 Ama Ata Aidoo
This Study Guide consists of approximately 40 pages of chapter summaries, quotes, character analysis, themes, and more - everything you need to sharpen your knowledge of Anowa.

Anowa is a drama set in the 1870s in Ghana. The action of the play takes place in three distinct places. In phase one, Anowa's action is confined to the village of Yebi, primarily to the cottage of Badua and Osam. There is a brief return to the cottage in phase two, which mostly takes place on a highway near the coast several years after phase one. The final phase of Anowa is set a few years later in Oguaa at Kofi Ako's big house built with the riches of his trade. All of the settings of Anowa have a domestic edge, underscoring the importance of the marital and familial relationships.

More summaries and resources for teaching or studying Anowa.

Anowa from Gale. ©2005-2006 Thomson Gale, a part of the Thomson Corporation. All rights reserved.