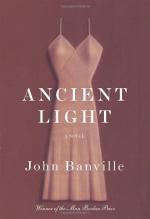 "Ancient Night" is a novel and winner of the Man Booker Prize by author John Banville. The story follows the main character, Alexander Cleave, as he recounts his first, and what believes might be his only true, love affair with his best friend's mother, Celia Gray. Alexander was fifteen when the affair began and Mrs. Gray in her mid-thirties.

Now that Alexander is an actor and in his sixties, he is retelling the story of how the unfair unfolds. He is also sharing tidbits of his life since the five-month affair came to abrupt ending. Alexander marries Lydia and they have a daughter, Cass. When Cass is twenty-seven, she commits suicide.

Alexander and Lydia also find out that Cass was pregnant when she died. As Alexander is cast in a movie about an identity thief, Axel Vander, he meets a famous actress that reminds him of Cass, Dawn Devonport. When Dawn tries to commit suicide, Alexander decides that he needs concrete answers to the questions that have plagued him his entire life.

Alexander embarks on a journey to find the truth. He wants to understand what happened that ended his affair with the love of his life, Celia Gray, by finding Mrs. Gray. Additionally, he wants to know why his daughter killed herself, especially when she was pregnant. Finally, he wants to find out more information about the man he is playing in the movie, because Alexander sees a bit of himself in the real-life identity thief.

Alexander hires an investigator, Billie Stryker, to find Mrs. Gray for him. While Billie doesn't locate Mrs. Gray, she does locate Mrs. Gray's daughter, Kitty, who is now Sister Catherine in a convent. When Kitty reveals the truth to Alexander about his affair with her mother and the state of Gray family currently, Alexander realizes that his own perception of the truth is very different from reality.