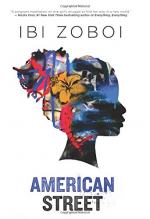 Ibi Zoboi
This Study Guide consists of approximately 33 pages of chapter summaries, quotes, character analysis, themes, and more - everything you need to sharpen your knowledge of American Street.

The novel opens with 16-year-old Fabiola Toussaint's arrival in Detroit. She was born in the United States but was raised in Haiti by her mother, Valerie. Valerie has been detained by immigration authorities in New York. At the airport in Detroit, Fabiola meets her cousins. Chantal, is in her late teens, and Princess and Primadonna (nicknamed "Pri" and "Donna" respectively) are 16-year-old twins. They take Fabiola to their house, and Fabiola meets her aunt Marjorie "Jo" Francois. Jo says she will try to secure Valerie's freedom from the detention center. The next day, Chantal enrolls Fabiola in the local private school. Fabiola asks how Jo makes money to support the family, but Chantal is evasive about the question.

On Saturday night, Pri and Donna take Fabiola to a local club. There, Fabiola meets Donna's friend Dray, who gives Fabiola the impression of general malevolence. She also meets Dray's friend Kasim, who seems rather kind. Back at home that night, Fabiola listens to the improvised singing of the man called Bad Leg who stands on the other side of the street. The song lyrics seem to imply that Dray beats Donna. Fabiola believes Bad Leg to be the Haitian spirit Papa Legba. Later that week, Fabiola is approached on the street by a woman who introduces herself as Detective Shawna Stevens. Stevens says that she believes Dray is dealing a type of drug that resulted in a girl's death in a wealthy, predominantly white suburb called Grosse Pointe Park. She says that she can secure Valerie's release if Fabiola can provide evidence of Dray's guilt.

Fabiola finds that she likes Kasim, and they go on a date to a dance performance. Kasim says that the tickets were paid for by Q, who is influential in the neighborhood and who is like a father to him and Dray. He says that Fabiola's uncle--Jo's husband--died because of something to do with Q, but Kasim doesn't elaborate. Later, Fabiola goes on a double date with Donna, Dray, and Kasim. Fabiola manages to look at Dray's text messages, and she sees something about a time and place. She passes this information along to Detective Stevens, but the information appears to be insufficient, as the police do not hold Dray for any significant period of time.

The following week, a man comes to the Francois family's house. Fabiola eavesdrops on the conversation and deduces that the man is Q. She learns from the conversation that Dray was not the one who sold the drugs that killed the girl in Grosse Pointe Park; her cousins were. Fabiola is shocked, and she confronts her cousins after Q leaves. They say that they had no choice but to sell drugs in order to support themselves. Fabiola struggles with how to proceed. She feels that she cannot turn her cousins over to the police in order to secure her mother's freedom.

She decides to frame Dray for her cousins' crime, as she knows that Dray does do illegal work for Q. She flirts with Dray and says that she needs money. He agrees to go to Grosse Pointe Park to deal some drugs. Fabiola tells Detective Stevens when and where Dray will be dealing the drugs. However, on the planned night, text messages from Kasim to Fabiola make it clear to Fabiola that Kasim is going with Dray. She tells her cousins what is happening and they all go to Grosse Pointe Park together. They see Kasim's dead body, as he has been shot by police. Back at the Francois family's home, Dray arrives and tries to kill Fabiola, but Bad Leg kills Dray. In the days following Kasim's death, people protest against the police brutality that killed him. Detective Stevens tells Fabiola that her mother will be released into the United States. Aunt Jo, Fabiola, and Fabiola's cousins drive west to retrieve Fabiola's mother.

More summaries and resources for teaching or studying American Street.