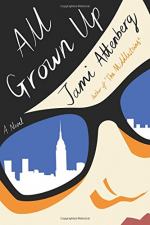 Plot Summary
+Chapters Summary and Analysis
The Apartment, Andrea, Indigo Gets Married
Charlotte, Chloe, Sigrid
Indigo Has a Baby, Evelyn, The Last Man on Earth
Felicia, Betsy, The Dinner Party
Nina, Indigo Gets a Divorce, Girl
Greta, The Actress
All Grown Up, Come Together
Free Quiz
Characters
Symbols and Symbolism
Settings
Themes and Motifs
Styles
Quotes
Order our All Grown Up Study Guide

Related Topics
The Middlesteins
Saint Mazie
All This Could Be Yours

All Grown Up Summary & Study Guide

Jami Attenberg
This Study Guide consists of approximately 44 pages of chapter summaries, quotes, character analysis, themes, and more - everything you need to sharpen your knowledge of All Grown Up.

All Grown Up Summary & Study Guide includes comprehensive information and analysis to help you understand the book. This study guide contains the following sections:

This detailed literature summary also contains Quotes and a Free Quiz on All Grown Up by Jami Attenberg.

This guide was made with the following version of this book: Attenberg, Jami. All Grown Up. New York: Houghton Mifflin Harcourt, 2017.

Andrea Bern, a 39-year old single woman and native New Yorker, has a host of personal issues that she refuses to confront. She grew up poor on the Upper West Side in a rent-stabilized apartment, with a mother who worked for non-profits and a father who was a part-time jazz player but also a drug addict who died of a heroin overdose. After the father's death, her brother moved out and Andrea's mother attempted to keep the family going by hosting parties where people paid for food. During one of those parties, Andrea was sexually molested by a man with goatee, and he attempted to rape her. The parties stopped afterwards.

After attending Hunter College in the city, Andrea relocates to Chicago for art school, where she begins to shadow a famous artist, Felicia, in the hopes of learning something about Felicia's art and winning her acceptance.. They become close but the mentor eventually loses her patience with Andrea, telling her to quit. This prompts Andrea to lose complete confidence in herself, and she spends a few weeks in Chicago with her friend Matthew, another artist, until she goes back to New York. She spends time with her brother and his girlfriend, Greta, who works for a fashion magazine, until she can sort herself out.

Stunted by a lack of ambition, Andrea takes the first opportunity she gets when Greta arranges for a job as an art director at an advertising agency. She finds a cheap apartment in Brooklyn with a good view of the Empire State building that eventually is removed due to construction of a building, prompting her to move into a smaller, more expensive apartment in Manhattan so she could have a view of the iconic building. Her attempts to add furniture to the apartment run into trouble when her mother tries to give her the chair her father died in. She calls her brother David once a week, who has married Greta and moved to New Hampshire after Greta's magazine folded and they could not keep up with the medical bills for Sigrid, their daughter who was born with a fatal heart disease. Despite keeping in touch, Andrea keeps a distance, not wanting to take in their sadness.

Intermittently, Andrea sees a therapist, with whom she discusses her lack of desire when it comes to forming long-lasting relationships. She questions her desires, trying to come to terms with her status as an aging middle woman. Despite the pressure from society and her friends, Andrea continues to see men without engaging in anything serious, including Baron, a single dad who has a difficult time moving on from his marriage, and Matthew, her friend from college who is struggling financially due to a career as an artist. Her friend Indigo, a spiritual yogi, is married to a Wall Street investor, and they have a child, before the marriage falls apart when the husband engages in an affair. Andrea also develops a burgeoning friendship with her younger co-worker Nina, who she discovers is having an affair with their boss. Uninspired, she begins to feel the tedium of her job and does not take it seriously, skipping days regularly, and hoping that she is fired.

Struggling to keep herself upright emotionally, Andrea is struck with a blow when her mother decides to move to New Hampshire to help out David and Greta with the baby. During lunch when Greta comes to New York, she accuses Andrea of deliberately distancing herself from them. Andrea begins an obsession with a semi-famous actress who lives in her building, and she almost sleeps her with her boyfriend. Soon, she receives a call from her mother, telling her that Sigrid is nearing her death. She takes off from work, realizing that her job may be in jeopardy but not caring. Once in New Hampshire, she finally embraces her family's pain, holding her niece and trying to connect with the life that is fading from her.

More summaries and resources for teaching or studying All Grown Up.

All Grown Up from BookRags. (c)2022 BookRags, Inc. All rights reserved.