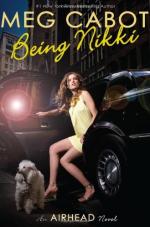 Meg Cabot
This Study Guide consists of approximately 18 pages of chapter summaries, quotes, character analysis, themes, and more - everything you need to sharpen your knowledge of Airhead #2.

This detailed literature summary also contains Topics for Discussion on Airhead #2: Being Nikki by Meg Cabot.

"Airhead #2: Being Nikki" is the story of Em, an average girl whose brain has been transplanted into a supermodel's body. She learns how to navigate the duties of "being Nikki" such as modeling, juggling school, work, and boys. In addition, Em also has to figure out exactly why her brain was used to replace Nikki's and what "crime" that Nikki committed against the corporation she worked for, Stark. At the same time, Em tries to duck Nikki's ex-boyfriend, the son of the head of the Stark Corporation, and reunite with her old friend, Christopher, who doesn't realize what's been going on.

Em is safe until a man claiming to be her brother shows up at her apartment. He tells her that their mother has disappeared and been gone for three months - exactly the amount of time that has elapsed since Nikki's accident. Steven, the brother, doesn't seem to believe entirely the official story about Nikki having amnesia, though it takes him some time to confront Em about this. Em then tells him the story in the best way that she can, still resolving to help him find his mother.

Christopher and his cousin, Felix, are the best computer hackers that Em knows, and will help Em and Steven find Mrs. Howard on the condition that Em/Nikki helps give them access to the Stark website, so that they can bring it down to avenge Em's death, as Christopher has still not realized what really happened to Nikki. While Em balances their search with modeling for the "Stark's Angels" lingerie fashion show, she is harassed by another model who claims that Nikki has been emailing her boyfriend.

When Em and her roommate Lulu give a party, everything comes together. Christopher realizes that Nikki is really Em and they reunite happily. The model's boyfriend shows up with proof that "Nikki" actually has been emailing him, and Felix communicates that he's traced Mrs. Howard to the home of Dr. Fong, outside the city. The group goes to investigate and finds not only Steven and Nikki's mother, but Nikki herself - transplanted into a decidedly dowdier body. Infuriated that someone else has "her" body, Nikki attacks Em, but is stopped by the rest of the group. When Em steps out to check on Brandon, Nikki's ex, he pulls her aside and tells her he knows everything, including the fact that Nikki - whom Stark wanted dead - is still alive. To protect everyone, he makes her break up with Christopher, then taking everyone else to his private island, claiming that he will tell his father if they don't comply.

More summaries and resources for teaching or studying Airhead #2: Being Nikki.