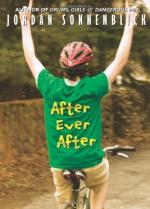 Plot Summary
+Chapters Summary and Analysis
Chapters Four Years Ago through Hot Legs
Lost in the Mail through The Pact
Handsome Babe Magnet Rides Again through Payback
Partners through Night of the Living Waterfowl
The End of Thanksgiving through Grounded, Sorta
Challenges throuigh This Chaper is Private
Tad and Lindsey, Part I through The Enemy of Math
The Real Enemy of Math through A Big Growth Year
On the Treadmill through One Small Step for Man
Who Knew... through Perpetual Care
Characters
Objects/Places
Themes
Style
Quotes
Topics for Discussion
Order our After Ever After Study Guide

After Ever After - The End of Thanksgiving through Grounded, Sorta Summary & Analysis

Jordan Sonnenblick
This Study Guide consists of approximately 33 pages of chapter summaries, quotes, character analysis, themes, and more - everything you need to sharpen your knowledge of After Ever After.

The End of Thanksgiving through Grounded, Sorta Summary

In "The End of Thanksgiving," Jeffery gets an eighty-six in math on his first report card of the year. His father is ecstatic. Tad, meanwhile, has progressed to the point that he can walk twenty-two steps on the treadmill. Jeffery says neither will land anyone in the record books but both were huge achievements.

The day after Thanksgiving, Jeffery's mom goes shopping and his dad goes to work. Jeffery rides his bike to Tad's house. Tad's younger sister, Yvonne, is also there. Tad calls Yvonne the "ERC," or "Emergency Replacement Child," because she was born a year after his diagnosis. Tad says his parents had Yvonne in case Tad didn't survive the cancer. Jeffery later dropped by Lindsey's house but she is out of town with her parents.

(read more from the The End of Thanksgiving through Grounded, Sorta Summary)

More summaries and resources for teaching or studying After Ever After.

After Ever After from BookRags. (c)2023 BookRags, Inc. All rights reserved.