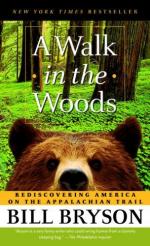 A Walk in the Woods Summary & Study Guide

Bill Bryson
This Study Guide consists of approximately 48 pages of chapter summaries, quotes, character analysis, themes, and more - everything you need to sharpen your knowledge of A Walk in the Woods.

A Walk in the Woods Summary & Study Guide Description

A Walk in the Woods Summary & Study Guide includes comprehensive information and analysis to help you understand the book. This study guide contains the following sections:

This detailed literature summary also contains Related Titles and a Free Quiz on A Walk in the Woods by Bill Bryson.

In the grand tradition of the travel memoir, writer Bill Bryson tells the story of his trek through the wilderness along the Appalachian Trail. With no real outdoors experience or knowledge of the trail's difficulty, he walks into a sporting goods store in his hometown of Hanover, New Hampshire, and spends a small fortune on the necessary gear, most of which is a mystery to him. His plan is to hike the entire 2,200-mile trail in one season, starting at Springer Mountain in Georgia and ending at Mt. Katahdin in Maine. He has a companion who is as comically unprepared for the trek as he is. Stephen Katz is an old school friend, who climbs off the plane with a large stomach and a duffel bag of Snickers.

Their trek starts at Amicalola Falls, a seven-mile hike from the Appalachian Trail's southern starting point, Springer Mountain. They set off in early March on a day of record cold and immediately discover what they have gotten themselves into. They are middle-aged, out of shape and carrying forty-pound packs on their backs over miles of hills that seem not to end, but after a few days they begin to settle into the trail. They meet many different types of hikers, including students, senior citizens, Boy Scouts and the air headed Mary Ellen, who attaches herself to them for several days. A few weeks into their trip they encounter a late snow that nearly strands them, but they push on after spending a few dull days in bunkhouses and motel rooms watching television.

A few days later they reach the Great Smokey Mountains, a more strenuous hike than the mountains of Georgia. They make it to the famed Clingman's Dome, the highest point on the Appalachian Trail, and decide to take a holiday in Gatlinburg, Tennessee, a tourist trap with motels, shops and fast food. There, they decide to skip over the rest of the Smokies. They take a cab to Knoxville, rent a car and drive to Roanoke, Virginia. Virginia is flatter and more springlike. They happily settle back into walking until Waynesboro, where Katz makes a date with a married woman and spends the rest of his time there hiding from her gun-toting husband. They proceed to encounter unidentitified animals in their camps and rude, drunken shelter mates. The first stage of their journey ends in Front Royal, Virginia, where the men part ways but plan to return in the summer to hike Maine's Hundred Mile Wilderness.

In the meantime, Bryson is determined to keep hiking, even if only by day, and has some unsatisfying hikes through the rocky terrain of Pennsylvania. More enjoyable hiking greets him in New England, where he hikes Massachusetts' Berkshire Mountains and Vermont's Stratton Mountain, the spiritual birthplace of the AT. In New Hampshire Bryson hikes Mt. Lafayette with a neighbor and has a scare when the weather turns and he finds that has forgotten his waterproofs. They also hike Mt. Washington, the New England AT's crowning glory and an enormous tourist attraction.

Bryson and Katz return to the trail in August to hike the Maine woods. It is difficult after months of unstrenuous hiking, particularly for Katz, who hasn't been hiking at all. For several days they laboriously cross lagoons and dangerous streams, and they quickly learn that they are in much more dangerous territory than any other they've experienced. One day, Katz leaves the trail in search of a shortcut and is lost for nearly two days. They decide they aren't cut out for this part of the trail and hitchhike out, spending their last night in Maine with a cheery guesthouse owner, who reminds them that the trail will still be there when they get ready to try again.

More summaries and resources for teaching or studying A Walk in the Woods.

A Walk in the Woods from BookRags. (c)2022 BookRags, Inc. All rights reserved.