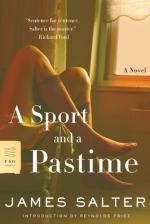 A Sport and a Pastime Summary & Study Guide

A Sport and a Pastime Summary & Study Guide Description

A Sport and a Pastime Summary & Study Guide includes comprehensive information and analysis to help you understand the book. This study guide contains the following sections:

This detailed literature summary also contains Topics for Discussion and a Free Quiz on A Sport and a Pastime by James Salter.

The story's narrator—who remains anonymous throughout the novel—moves to a small French town named Autun where he is unexpectedly joined by the brilliant though unconventional Philip Dean. The narrator quickly comes to admire him. When Dean becomes involved with a young French girl named Anne-Marie he starts to obsessively piece together—from facts and his own feverish imagination—their time together. Dean ultimately leaves everything in France behind for America but dies in a car accident not long after his return.

As the story opens, the narrator, still living in Paris, is dreaming about living in Autun—or anywhere outside of the bustle and distraction of urban life. His friends, Cristina and Billy Wheatland, have a house there which is seldom use and he takes advantage of their offer to move into it. Philip Dean, who has heard of his move, arrives not long after. The two do not really know each other very well; they met for the first time shortly before the narrator left Paris. The two travel and carouse lavishly until Dean meets Anne-Marie. They first see her flirting with some soldiers at a nightclub in Dijon but Dean, somehow, manages to find her again. The narrator, already impressed by Dean's strong character and bold attitude towards life, follows their relationship closely, as much through his own fantasies as whatever facts he has access to.

The two lovers have completely different attitudes towards the relationship. Anne-Marie, a simple girl who is completely in love with Dean, wants nothing more than to settle down and start a family with him; she wants a normal life, just like everyone else she knows. Dean, on the other hand, alternates between despising her and adoring her. His main interest in her is his ability to utterly dominate her, emotionally and sexually. She fulfills his narcissistic desire to completely possess someone while, at the same time, not at all being possessed. He realizes, with sadness, that their relationship cannot last forever, for there is nothing to sustain. Thus, he savors each moment realizing that they are being led inevitably to a messy end.

They wind up getting married on a summer road trip but, once again, each takes a unique perspective on it. For Anne-Marie, it is the beginning of a long marital bliss. For Dean, it is a desperate and temporary measure to patch together a fundamentally dysfunctional relationship. It is not a long-term solution and, indeed, when he returns to Autun after the road trip he prepares to return to the United States, supposedly to finish school. He promises the narrator that he will return to Autun and, contradictorily, he promises Anne-Marie that he will fly her out to America. There is no time for his promises even to go unfulfilled, though. He is killed in a car accident shortly after he arrives in America. Anne-Marie is eventually able to move on and have the normal life she wanted all along. The narrator, however, who was in some ways even more enraptured by Dean's impressive personality, cannot help but continue to think about him.

A Sport and a Pastime from BookRags. (c)2022 BookRags, Inc. All rights reserved.