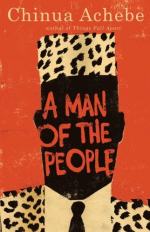 A Man of the People Summary & Study Guide

Chinua Achebe
This Study Guide consists of approximately 32 pages of chapter summaries, quotes, character analysis, themes, and more - everything you need to sharpen your knowledge of A Man of the People.

A Man of the People Summary & Study Guide Description

A Man of the People Summary & Study Guide includes comprehensive information and analysis to help you understand the book. This study guide contains the following sections:

This detailed literature summary also contains Topics for Discussion on A Man of the People by Chinua Achebe.

A Man of the People was written by Nigerian author Chinua Achebe in 1966. The book is narrated by Odili, a young teacher in an unnamed African country run by greedy and corrupt politicians. His own former teacher, referred to as both “Mr. Nanga” and “Chief Nanga,” is now an elected official and the Minister of Culture of the country. When Chief Nanga comes to visit his home village, he and Odili meet again, and Chief Nanga invites Odili to stay at his home in the capital city while the Chief makes arrangements to help Odili study abroad. Despite his dislike for Chief Nanga’s politics and his way of doing business, Odili is somewhat charmed by the man. He is also attracted to a young woman, Edna, who travels with Chief Nanga and is supposed to become the Chief’s second wife.

Odili accepts Chief Nanga’s invitation, and spends time with him in the capital city. Odili learns that Chief Nanga lives in luxury as a result of his corrupt practices and knows very little about culture, despite his position. Odili has had an affair with a young woman, Elsie, whom he brings to Chief Nanga’s home with the intention of spending the night with her. However, she sleeps with Chief Nanga instead. Chief Nanga doesn’t understand why this makes Odili angry. Odili decides he will take revenge on Chief Nanga by seducing Edna, the young woman the official plans to marry.

Odili becomes involved in a new political party that seeks to replace the current ruling party. As he becomes more and more opposed to Chief Nanga, Odili decides to run for office in an attempt to take Chief Nanga’s position. The members of the new party believe they will provide more effective, more honest government. However, Odili learns the people of his country are quite cynical. They expect politicians will take bribes and make themselves rich. In fact, many of the people Odili meets are primarily interested in getting a share of the money gathered by corrupt officials.

Odili struggles with a number of moral decisions as he wages his campaign, for example having to decide whether to take money as a payment for withdrawing from the election. He tries to show the people the present government is lying and stealing, but no one seems to care. In fact, Odili is threatened and bullied as he tries to run his campaign, and his father and his village are punished for his actions.

Odili realizes he is genuinely in love with Edna, and his desire for her is no longer just a result of his wish to get revenge on Chief Nanga. Edna, however, feels obligated to marry the Chief because he has given her family money and her father is pressuring her.

Odili decides to attend the event that launches Chief Nanga’s campaign, where Odili is recognized and beaten nearly to death. During the weeks of his recovery in the hospital, things change in Odili’s personal life and for the entire country. Although Chief Nanga’s party wins the election, the aftermath is unrest and chaos, and ultimately the military overthrows the government. Then the people of the country come forward and talk about how terrible the former government was, despite their support for the same elected officials when they were in power. Edna stands by Odili through his recovery, and eventually his family makes arrangements for Odili to marry her. Odili is sad to learn of the death of his friend Max, who was killed by a former government official, but reflects an honorable death is about the best one can hope for in so corrupt a country.

This book is written in British-style English, so the reader may notice some of the spelling and punctuation is different from American English. There are also a few unfamiliar words, such as “lorry” instead of “truck.” In the dialogue, the characters occasionally speak in pidgin, which is not a true language, but a local variation on English that may be a bit difficult for the reader to understand. However, even without understanding every word, the reader can usually get the basic meaning of the dialogue.

More summaries and resources for teaching or studying A Man of the People.

A Man of the People from BookRags. (c)2022 BookRags, Inc. All rights reserved.