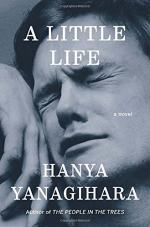 Related Topics
The People in the Trees

Hanya Yanagihara
This Study Guide consists of approximately 60 pages of chapter summaries, quotes, character analysis, themes, and more - everything you need to sharpen your knowledge of A Little Life.

This detailed literature summary also contains Quotes and a Free Quiz on A Little Life by Hanya Yanagihara.

The following version of this book was used to create this study guide: Yanagihara, Hanya. A Little Life. New York: Doubleday, 2015.

The novel opens in New York City. Jude St. Francis and his friend Willem Ragnarsson have recently become roommates in a small, affordable apartment. Jude is a young lawyer, and Willem is an aspiring actor. They are in their mid-twenties, and they first met in college. Their two other good friends from college are JB—an aspiring painter of Haitian descent—and Malcolm—an aspiring architect of biracial heritage. Jude never talks about his pre-college life. He occasionally suffers from sharp pain in his legs, which he says is from nerve damage caused by a car accident. After Jude and Willem move in together, it becomes evident to Willem that Jude sometimes cuts his own arms with razor blades.

Jude’s other close friends are his doctor Andy, and his former law professor Harold Stein. Jude and Harold became quite close when Jude was Harold’s student and research assistant. When Jude is about 30 years old, Harold and Julia, Harold’s wife, legally adopt him. Jude, JB, Malcolm, and Willem begin to establish themselves in their respective fields. Jude works as a lawyer for the government, Willem begins to find steady work as an actor, JB begins to gain recognition as a painter, and Malcolm begins to find substantial work as an architect. Meanwhile, Jude continues to struggle with mental and emotional issues related to traumas he suffered in the past. He still refuses to speak about these traumas, but Harold says that he will love Jude no matter what.

Willem’s career continues to gain momentum in the following years, and he even stars in an action blockbuster. Willem, Jude, JB, and Malcolm begin to grow apart due to their careers. Willem often leaves town for film shoots, but he visits Jude whenever possible. Jude continues to struggle with pain and health issues due to his legs, and he often has to use a wheelchair. Due to rising medical costs, he leaves his government job and begins working for a large corporate law firm. Meanwhile, JB begins to struggle with drug addiction. His friends try to help him attain sobriety. One day, under the influence of drugs, JB harshly mocks and insults Jude, causing a potentially permanent rift between them.

Over the following years, Willem is Jude’s closest and most consistent friend. Willem encourages Jude to seek out romantic companionship, as he has never seen Jude in a relationship. Jude is deeply averse to the idea at first, but he later meets a fashion executive named Caleb porter, and they soon form a rapport. Jude and Caleb date for four months, but it soon becomes evident that Caleb is highly abusive. Caleb repeatedly beats Jude, rapes him, and verbally abuses him. The relationship seems to exacerbate Jude’s underlying psychoses, even after the relationship ends. About a year later, Jude learns that Caleb recently died of cancer. Jude has traumatic flashbacks to the relationship, and he tries to kill himself.

The narration reveals that, from infancy, Jude was raised in a Catholic monastery in South Dakota. Many of the men there inflicted frequent and severe beatings upon Jude. Some of the men also repeatedly raped Jude over the years. At age eight, Jude fled from the monastery with the only man there who had been consistently kind to him: Brother Luke. However, for the next four years, Luke forcibly had sex with Jude, and he also forced Jude to have sex with men for money. Luke taught Jude to cut himself as a supposed method of managing emotional pain. Police eventually tracked down Luke and Jude, and Luke killed himself.

The narration later reveals that after Jude was finally rescued from Luke, Jude was sent to an orphanage where the counselors repeatedly beat and raped him. Jude escaped at age 14 and hitchhiked away from the orphanage; Jude resorted to having sex with truckers in exchange for transportation. In Philadelphia, a man named Dr. Traylor lured Jude into his home and held him captive for weeks, repeatedly besting and raping him. Jude eventually escaped and was put in the care of a kind social worker named Ana. Ana helped Jude apply to college and enroll. When Jude was a junior in college, law enforcement finally found and arrested Dr. Traylor.

Jude survives his suicide attempt. Willem has become a film star by this point, but he decides to temporarily put his career on hold to live with Jude and take care of him. Willem eventually develops feelings for Jude, and they begin to have a romantic relationship. However, because of Jude’s past traumas, the act of having sex is always extremely unpleasant for him. They still love each other, and they form a tacit agreement by which Willem can have sex with people outside of their relationship. One day, when Jude and Willem are in their mid-fifties, Willem is killed in a car crash. Malcolm and his wife Sophie die as well, as they were in the car with Willem.

Jude is devastated by Willem’s death, and his mental/emotional health becomes even worse. Jude begins to purposely malnourish himself in the hope of dying. However, his loved ones stage an intervention and take a more active role in monitoring his physical and mental health. At one point, Harold and Julia’s love and support bring Jude to a moment of deep catharsis. Unfortunately, his mental health continues to decline after that, and he eventually kills himself.

More summaries and resources for teaching or studying A Little Life.