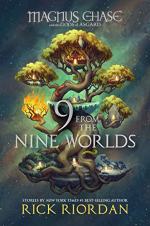 The final story is titled “I Play with Fire” (125), by Alex Fierro. It is set in Muspellheim, home of fire giants and demons. This story continues from the end of the previous one. Alex left Halfborn’s room after Halfborn and Mallory started kissing. Alex remembered that his friend Magnus left a “talking blade” (125) with him.

Alex was explaining his gender fluidity to the audience by revealing that he now identifies as a woman when the sword, Jack, awoke. Jack told Alex that he had heard of a “nefarious plot” headed by Surt, the fire lord of Muspellhiem (126) through the underground weapon network. Jack did not know the details of the plot, so Alex told Jack to get ready, so they could investigate. Jack refused because he knew he could not resist Surt’s influence.

Alex considered various strategies for the investigation with...

9 From the Nine Worlds from BookRags. (c)2023 BookRags, Inc. All rights reserved.