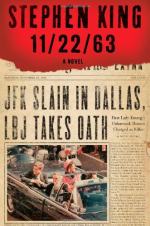 11/22/63: A Novel Summary & Study Guide includes comprehensive information and analysis to help you understand the book. This study guide contains the following sections:

This detailed literature summary also contains Quotes and a Free Quiz on 11/22/63: A Novel by King, Stephen.

The novel 11/22/63 by Stephen King imagines what might have happened had United States President John F. Kennedy not been assassinated. The main character, Jake, narrates the story in first person.

Jake was recruited by his friend, Al, who wanted to stop Kennedy’s assassination with a time travel portal in his diner known as the rabbit hole. The rabbit hole dropped anyone who traveled through it to that exact spot in 1958. Al contracted lung cancer and knew that he would not live long enough to achieve his goal alone.

Jake agreed to consider taking over Al’s project of keeping Kennedy from getting assassinated if he could first do a test run with the Dunning family. As a teacher, Jake worked with Harry Dunning, a man who had been badly injured when his father killed his family with a hammer. Jake wanted to know what would happen in 2011 if he managed to save Harry’s family and keep Harry from getting hurt. Jake was uncertain about the benefits of changing the past when he learned that he saved Harry from having a bad leg so that he could get killed in Vietnam.

Because Al sensed that Jake was having second thoughts about saving Kennedy, Al overdosed on his pain medication, forcing Jake to make the decision to save Kennedy. During the years 1958 and 1963, when the president was to be killed, Jake stayed busy in various ways. He got a diploma from a certificate mill so that he could work as a substitute teacher and put in bets on sporting events to earn money. He began writing a book about his time in the past. That manuscript is purported to be this novel.

While biding his time in Texas, spying on Lee Harvey Oswald and waiting for the date of Kennedy’s assassination, Jake fell in love with a woman named Sadie. This woman turned out to be a distraction for Jake; she was attacked by her ex-husband on the same day Jake was supposed to be watching Oswald to see if he acted alone when he attempted to kill General Walker. Had Oswald been alone when he tried to shoot Walker, Jake would have been fairly certain he was alone in his plans to assassinate Kennedy. Because he was trying to save Sadie, Jake only learned that Oswald was alone when he questioned George de Mohrenschildt, the man Al believed might have been a conspirator with Oswald.

As time drew closer to the date of the assassination, Jake was badly beaten by a bookie and his goons with whom Jake had won big on a bet. He had a head injury and his memory was affected. Sadie tried to help Jake remember who he was supposed to be saving but he had given her so little information about why he was there that she was not able to help him much. As Jake’s memory came back in the week prior to the assassination, Jake tried to keep Sadie away from what he was doing because he did not want her to get hurt. Sadie found him and insisted on being allowed to help him. During the gunfight with Oswald, Sadie was killed.

Jake was questioned by the FBI and then allowed to go free as long as he went into hiding. Jake agreed to the rules set up by the FBI and went back to 2011. He learned that the United States was nothing like the country that he knew from 2011. People there were dying of cancer because of radiation poisoning. Public services, like electricity, were not dependable and some states had voted to join Canada. Martin Luther King Jr. had still been killed even though Al had hoped saving Kennedy would stop this assassination. The race riots had still taken place.

Jake left 2011 and returned to 1958. The Green Card Man, a man whose purpose was to keep people from dabbling in the past, begged Jake to return to 2011 so he could close the circle and repair the damage he had done to the future. Jake resisted because he wanted to see Sadie, but ultimately decided it was more important to save the universe than be with the woman he loved. In the end of the novel, Jake visited Sadie after he returned to 2011 even though she was much older than he was. When they danced, Sadie got the feeling they had met before.