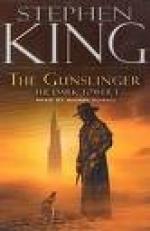 Stephen King
This Study Guide consists of approximately 8 pages of chapter summaries, quotes, character analysis, themes, and more - everything you need to sharpen your knowledge of The Dark Tower Series.

The plot development of The Gunslinger is unusual for Stephen King.

The novel began as five short stories published in The Magazine for Fantasy and Science Fiction from October 1978 to November 1981. All the stories are closely linked in time and place, but each chapter has its own development and climax. In contrast, The Drawing of the Three contains a longer, more unified buildup and a central climax at the end of the novel. The structure of the second work is foreshadowed in the first by Roland's encounter with a sexually hungry ghost-oracle, whose prophecy is repeated but left vague by the Man in Black's tarot card reading.

The three cards—The Prisoner, The Lady of Shadows, and Death—constitute the three major sections of the novel, interspersed with a "shuffling," which reestablishes order and prepares for the next "drawing."

The setting of the two works is...

More summaries and resources for teaching or studying The Dark Tower Series.

The Dark Tower Series from Gale. ©2005-2006 Thomson Gale, a part of the Thomson Corporation. All rights reserved.