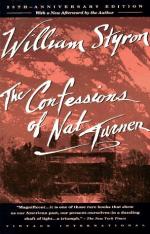 William Styron
This encyclopedia article consists of approximately 12 pages of information about The Confessions of Nat Turner.

William Styron, a white writer and novelist, was born in 1925 in Newport News, Virginia, the same tidewater region where the real Nat Turner lived one hundred years earlier. Styron's grandmother grew up on a North Carolina plantation, where she owned two slave girls. The hours spent listening to his grandmother's stories about owning slaves haunted the young Styron for years. It troubled him deeply that by his own time racial inequalities still had not been set right. In 1966, during the midst of the growing black civil rights movement, Styron published The Confessions of Nat Turner, one of his most controversial novels. The book, which focused on the life and rebellion of a black slave in nineteenth-century Virginia, helped shed light on the racial unrest that persisted into the twentieth century.

More summaries and resources for teaching or studying The Confessions of Nat Turner.

The Confessions of Nat Turner from Gale. ©2008 Thomson Gale, a part of the Thomson Corporation. All rights reserved.