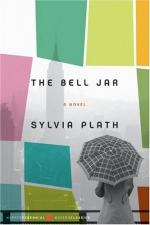 The Bell Jar - Research Article from Literature and Its Times

Sylvia Plath
This encyclopedia article consists of approximately 13 pages of information about The Bell Jar.

In her novel The Bell Jar, Sylvia Plath describes the torment that she suffered during a mental breakdown and suicide attempt. Although she tells the first-person tale through her character Esther Greenwood, the girl's experiences are based on those of the author herself. Plath began the novel in 1960, after both she and her husband, Ted Hughes, had gained a degree of renown in the literary world as poets. The novel addresses the earlier event from Plath's life inside a literary work that may have been an attempt at a healing process. If so, however, the attempt did not leave her wholly healed-Plath killed herself only one month after the publication of The Bell Jar.

The American woman of the 1950s. The novel's main character, Esther Greenwood, struggles throughout the course of the...

The Bell Jar from Gale. ©2008 Thomson Gale, a part of the Thomson Corporation. All rights reserved.