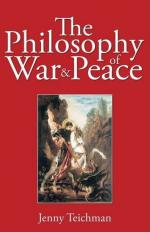 Peace, War, and Philosophy - Research Article from Encyclopedia of Philosophy

This encyclopedia article consists of approximately 15 pages of information about Peace, War, and Philosophy.

Speculation about war and peace as conditions of interstate relations has tended to divide thinkers into two groups—those who regard war as inevitable, perhaps even desirable, and those who consider it an evil capable of being replaced by lasting peace through good will or improved social arrangements. The first group is sometimes described as "realist" and the second as "idealist," but these terms have the drawback that such idealist philosophers (in the ontological sense) as Plato and Georg Wilhelm Friedrich Hegel often accept war as a permanent condition of human existence. It is therefore proposed here simply to call the first group "conservatives" and the second "abolitionists," though a wide spectrum of opinion clearly exists within each subdivision.

Ancient Greek thought commonly accepted war between the city-states themselves and between Greeks and "barbarians" as part of...

More summaries and resources for teaching or studying Peace, War, and Philosophy.

Peace, War, and Philosophy from Macmillan. Copyright © 2001-2006 by Macmillan Reference USA, an imprint of the Gale Group. All rights reserved.