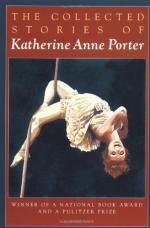 Noon Wine - Research Article from Literature and Its Times

Callie Russell Porter (who later changed her first name to Katherine Anne) was born in a log cabin in Indian Creek, Texas, in 1890. Her travels of the early 1900s took her from revolution-torn Mexico to Berlin, Germany, to Paris, France. It was not until she moved to Paris in 1933 that she began to make use of her Texas past, returning in fiction to the world of her childhood in Noon Wine. Several decades later, after receiving high acclaim for her novel Ship of Fools (1962), Porter won the National Book Award and the Pulitzer Prize for The Collected Stories of Katherine Anne Porter (1965). Along with her latest work, the collection included previously released stories such as Noon Wine.

Swedish immigration. Although Swedes had been coming to America as early as 1638, the number of...

More summaries and resources for teaching or studying Noon Wine.

Noon Wine from Gale. ©2008 Thomson Gale, a part of the Thomson Corporation. All rights reserved.