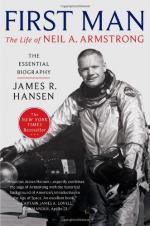 When Neil Armstrong walked on the surface of the Moon on July 20, 1969, he captured the attention of the world. A feat that had been thought impossible had been accomplished—and then televised into the homes of millions. The Moon, the Earth’s single natural satellite located 240,000 miles away, was no longer just the subject of poetry or science fiction. And walking on it was no longer simply a dream. The effort to travel to the Moon grew out of a pledge made by President John F. Kennedy in the early 1960s to put an American on the Moon by the end of the decade. On July 20, 1969, the name of one individual, Neil Armstrong, became synonymous with human exploration of the Moon.

Born on a farm near Wapakoneta, Ohio, on August 5, 1930, Armstrong says his earliest memory...

More summaries and resources for teaching or studying Neil Armstrong.

Neil Armstrong from UXL. ©2005-2006 by U•X•L. U•X•L is an imprint of Thomson Gale, a division of Thomson Learning, Inc. All rights reserved.