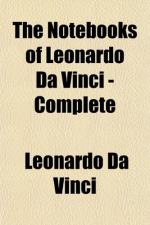 Leonardo da Vinci was born in the Italian town of Vinci. As a young boy, he showed a talent for painting. When he was 20 years old, he joined the painters' guild in Florence. Within a few years, Leonardo's talent was known all across Europe. Although he completed only thirty paintings, two of them—the Mona Lisa and The Last Supper—are among the most easily recognized paintings of all time.

Leonardo was more than a painter: He was a scientist and mathematician who explored botany, mechanics, astronomy, physics, biology, and optics. Leonardo developed prototypes of the modern helicopter, submarine, and parachute, and he attributed his scientific discoveries to mathematics. He wrote, "There is no certainty in science where mathematics cannot be applied."

Although Leonardo dabbled in different areas of mathematics, geometry was his chief focus. He discovered a proof...

Leonardo Da Vinci from Macmillan. Copyright © 2001-2006 by Macmillan Reference USA, an imprint of the Gale Group. All rights reserved.