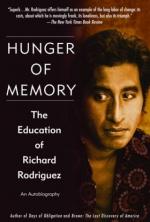 Hunger of Memory - Research Article from Literature and Its Times

Richard Rodriguez
This encyclopedia article consists of approximately 14 pages of information about Hunger of Memory.

Richard Rodriguez was born on July 31, 1944, to Mexican immigrants Leopoldo and Victoria Rodriguez. In spite of the difficulties he faced as a Spanish-speaking child in the United States, Rodriguez excelled in school and eventually earned a Ph.D. in English literature. In 1976, rather than accept one of many job offers from prestigious universities, Rodriguez postponed a career as a professor. Although confident in the quality of his work, he could not quiet the suspicion that universities sought him primarily because he was a member of an ethnic minority. Rodriguez spent the next six years writing his autobiography, Hunger of Memory.

More summaries and resources for teaching or studying Hunger of Memory.

Hunger of Memory from Gale. ©2008 Thomson Gale, a part of the Thomson Corporation. All rights reserved.