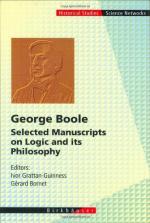 George Boole - Research Article from Science and Its Times

This encyclopedia article consists of approximately 2 pages of information about George Boole.

George Boole was an English mathematician who was among the founders of modern symbolic logic. His algebra of logic, which has come to be called Boolean algebra, is basic to the design of digital computers.

Boole was born on November 2, 1815, in Lincoln, England. His father was a tradesman, and taught him how to make optical instruments, as well as the rudiments of mathematics. A local bookseller taught him Latin. Aside from this early training and a few years at local schools. Boole was self-educated. He had to earn an income to help support his family, and by the age of 20 he was an experienced schoolteacher with his own school in Lincoln. In his limited free time, he studied mathematics, including such classic works as Isaac Newton's (1642-1727) Principia, Pierre Simon de Laplace's (1749-1827) Traité de mécanique céleste, and Joseph Louis Lagrange's...

More summaries and resources for teaching or studying George Boole.

George Boole from Gale. ©2005-2006 Thomson Gale, a part of the Thomson Corporation. All rights reserved.