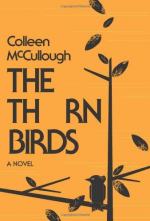 Colleen McCullough
This set of Lesson Plans consists of approximately 135 pages of tests, essay questions, lessons, and other teaching materials.

1. What occupation does Dane want to pursue?
(a) The priesthood.
(b) Store owner.
(c) Blacksmith.
(d) Sheep shearer.

2. Who does Archbishop de Bricassart encounter one evening?
(a) Jims.
(b) Meggie, waiting at St. Peter's.
(c) A German solder, by the name of Rainer.
(d) The Pope.

4. What nationwide event happens that involves the Cleary family?
(a) Wool and other sheep products are no longer in demand.
(b) The Prime Minister declares war on Germany.
(c) The tax rate skyrockets.
(d) There is an earthquake.

5. Why is Meggie initially attracted to Luke?
(a) Because he reminds her of Paddy.
(b) Because he superficially resembles Father Ralph.
(c) Because Fiona thinks he is a good catch.
(d) Because he is physically strong.

8. Where does Meggie go for a getaway after her daughter's birth?
(a) Matlock.
(b) Wahine.
(c) To see Fiona's family.
(d) Drogheda.

9. What last act of courage does Dane perform?
(a) He pushes Justine out of the way of a bus.
(b) He tells Father Ralph that he is his son.
(c) He rescues a German woman from drowning.
(d) He stands up to Luke and tells him what he thinks of him.

10. Where will Meggie's wages from her housekeeping job go?
(a) Straight into Luke's bank account.
(b) To support the Catholic church.
(c) To send Jims and Patsy to boarding school.
(d) To support her family at Drogheda.

13. What is Bob like?
(a) Familiar with the young ladies in the area.
(b) Outgoing and friendly.
(c) Pushy and aggressive.
(d) Shy and preoccupied with Drogheda.

14. Why does Fiona see things from Meggie's perspective?
(a) Because she doesn't want her grandchildren to leave Drogheda.
(b) Because Luke is indifferent to the children.
(c) Because she felt the same way with Paddy.
(d) Because she takes up for her daughter.

15. What does Luke want to borrow from Bob for his date to the dance with Meggie?
(a) Paddy's suit.
(b) Money.
(c) Flowers from the garden.
(d) The Rolls Royce.

1. What does Luke teach Meggie to do?

2. What does Luke believe he should do when they get married?

3. What decision does Meggie make during her getaway?

4. What position is Father Ralph elevated to at the end of the war?

5. Whom does Justine meet in Rome?