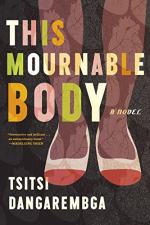 Tsitsi Dangarembga
This set of Lesson Plans consists of approximately 137 pages of tests, essay questions, lessons, and other teaching materials.

1. How often do Tambu's niece and nephew visit her in her new home in Chapter 17?

2. What does Tambu forget to bring for her mother that she only realizes early in Chapter 20?

3. What gift does Tambu bring for her mother in Chapter 20?

4. What kind of car does Tambu get from her job?

1. What does Tracey ask Tambu to have her relatives and friends in the village do in Chapter 21 that Tambu is not comfortable with?

2. What does Nyasha bring for Tambu in Chapter 17 from her own house that Tambu left behind?

3. What does Tambu realize she has forgotten to do concerning Nyasha in Chapter 15?

4. What position does Tambu's mother tell her she holds in the village that Tambu thinks will help their business endeavor?

5. What happens with Mai Taka and her husband Silence when Mai Taka goes to the movies with Nyasha's family in Chapter 13?

6. What is Pedzi's new idea for Green Jacaranda in Chapter 16?

7. What continues to bother Tambu about her job security and career in Chapter 16?

8. What is the phrase Tambu uses in Chapter 20 that means almost the same thing as a bribe?

9. How do Nyasha and Leon eventually dispel the tension between Mai Taka and Silence in Chapter 13?

10. What do Christine and Aunt Lucia try to convince Tambu of in Chapter 21?

Why do Christine and Aunt Lucia object so strenuously to Tambu's incorporation of her family and her homestead into the Green Jacaranda brand? How does each of these women's experiences in the war affect their entreaties to Tambu on this issue? Write an essay explaining your answer.

Early on in the novel, Tambu not only fails to help an acquaintance of hers as a situation in the street quickly escalates towards violence; she actually considers participating in carrying out violence against this woman, Gertrude (21). Write an essay analyzing the possible reasons and motivations behind Tambu's callousness, citing specific references to the text in your answer.

Consider the titles of the three main sections of the novel: Ebbing, Suspended, and Arriving. Write an essay analyzing how these three titles embody the topics, tone, and actions in each of the sections. Also discuss how the sections fit together.

More summaries and resources for teaching or studying This Mournable Body.